Electricians supported by their trade union, Unite, gathered outside the BBC in Glasgow on 17th December to highlight their campaign to halt the downgrading  of their pay by up to 35 percent and  stop the introduction of a new grade of semi-skilled worker on construction sites.  The campaign targets seven building contractors who want to impose the Building Engineering Services National Agreement (Besna) leading to de-skilling of electrical work and massive cuts in wages and terms and conditions. 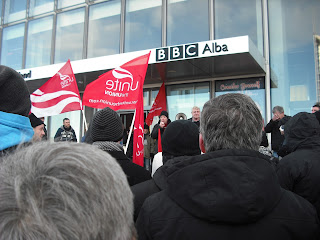 Electricians gather outside the BBC.


I joined the rally in support of electricians and she called for building contractors to adhere to the existing Joint Industry Board (JIB) national agreement. It is unacceptable to try to force electricians to sign up to a 35 percent cut in their wages. The current electrician’s JIB rate of £16.25 per hour should be preserved, along with working hours split into 7.5 hour days, across Monday to Friday.

I am aware that Balfour Beattie, one of the construction companies seeking to impose the new agreement, has made massive pre - tax profits last year totaling £50.5 million. The current approach being taken by senior management within the construction industry seems to be only concerned with increasing these profit margins. As a result of management actions, electricians and their families are faced with financial hardship and it is not surprising that they organise protests and walkouts at construction sites across the country. The construction companies must withdraw the threat of imposing Besna terms to avoid further disruption within the industry.