There are plans for St. Georges Cross which involve the installation of a 20m monopole, associated cabinets and ancillary works.

I have objected on the basis that this proposal is  Contrary to Placemaking Principle – CDP1. The City Development Plan expects new proposals to be designed to protect the City’s heritage. The site is a small public space at the intersection of Maryhill Road, St. Georges Place, and St. Georges Road. It is of cultural significance with a statue of St. George and the dragon, saved from the Co-operative Wholesale Society at the cross when it was demolished. 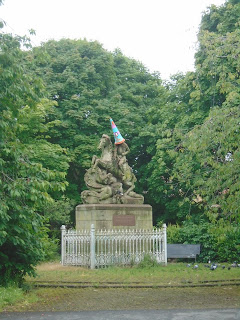 View of the statue and surrounding trees at St. Georges Cross 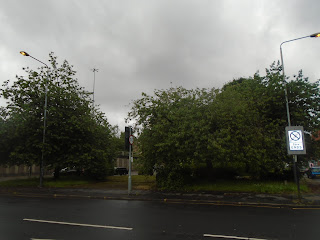 There has been engagement with a variety of stakeholders to develop plans for the site opposite 274 St. Georges Road as part of the Glasgow City Region Deal’s Avenues Project. in the past 2 years, this has involved local consultation and community engagement to gather views on ways to improve the public realm, and support active travel. During this public consultation, there was no suggestion that the installation of 20m monopole, associated cabinets and ancillary works was planned. This installation is not appropriate for a public space with a unique statue and well known historic landmark within the city’s architectural heritage.The civic amenity of the site has to be preserved and enhanced as part of the place-making process. The contribution of this site to local people’s civic pride will not be supported by the installation of a mobile phone pole. The mobile phone pole will detract from the beauty and character of the statue, as well as surrounding trees and wider public realm at this site. It will have a negative impact on the appearance, attractiveness and perception of this public space. The height and shape of the monopole would be an eyesore alongside the statue of St. George and the dragon located a few metres away.The aims of the Avenues Project for the site would not be achieved by installing the 20m monopole, associated cabinets and ancillary works. It will not support regeneration of public realm as part of The Underline: the section of road that links Great Western Road with the city centre and includes New City Road and Cambridge Street. The 20m monopole would create an eyesore and spoil the existing designs planned to enhance the attractiveness of the area for local residents as well as visitors to the area.

Also the proposal is contrary to Planning Policy CPD9 - Protecting and Enhancing the City's Historic Environment. Within the City Plan, with reference to CPD9, there is a presumption in favour of protecting historic landmarks from inappropriate new development. The proposal has an adverse impact on the streetscape and skyline of a unique statue and is detrimental to the visual amenity of a public area.The proposal will negatively affecting the views of the statue of St. George and The Dragon from surrounding streets including Maryhill Road, St. Georges Road, St. Georges Place, and New City Road.The statue of St. George and the Dragon is featured in the Woodside Heritage Trail.
The plans will damage the appearance of a site of special historic importance to the Woodside area and city’s history in general.  It is an established open space used by the public for recreational benefits including a Christmas tree lights switch on.It is listed as Application Reference Number: 20/01471/PNT and the closing date is 31st July 2020.
Posted by ScottishGreenParty at 15:05