On Friday, I had the pleasure of attending a seminar by Faten Nastas, a Palestinian Artist based with Diyar, in Bethlehem. This was part of a series of events supported by the twinning agreement between Glasgow and Bethlehem.


The mission of Diyar is "That We Might Have Life and Have It Abundantly".


The Diyar Consortium offers educational opportunities in visual arts, performing arts and tourism. It appears to have a vital role by supporting new job opportunities and talented people are able to develop their own livelihoods.

Plans for a bus car park

The Accord Centre is a day care facility for people with learning disabilities in the East End.  Currently, it is proposed that this Centre will be demolished and a transport hub with bus parking created on the site for the 11-day Commonwealth Games in 2014. 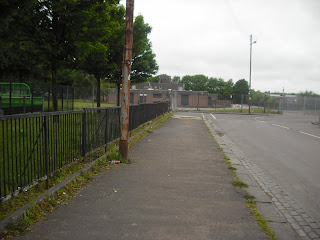 View of the Accord Centre.


As part of the legacy for the Commonwealth Games, investment in new transport infrastructure seems to have been higher up the agenda than services for carers and people with learning disabilities. There is funding provided for new roads including the M74 Extension and East End Regeneration Route, and a transport hub with bus car park on the site of the Accord Centre. However, there is uncertainty over resources for day care services needed by people with learning disabilities and their families. 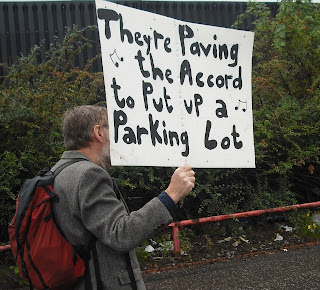 Banner from the demonstration to save the Accord Centre on 27th August.

I understand that there are negotiations taking place to ensure that there is a plan to accommodate the services provided by the Accord Centre.

As a legacy of the Commonwealth Games, investment should be provided to ensure that people with learning disabilities and their families have access to dedicated day care facilities, and they should feel that they are recognised and valued members of the community within the East End.
Posted by ScottishGreenParty at 08:02 No comments:

There is a landfill site owned by Glasgow City Council which is located nearby Coatbridge. It has not be in the use for the last 10 years and a contract has been agreed for the capping of the site. 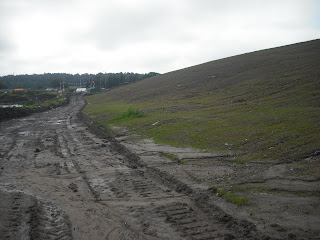 View of haulage road and part of the landfill site.

The existence of this landfill site was flagged up to myself several years ago. I have taken on board the concerns of local residents who live nearby, and asked questions about the site. Thanks to assistance from council officials, I have been able to visit and gain a detailed insight in to its history. 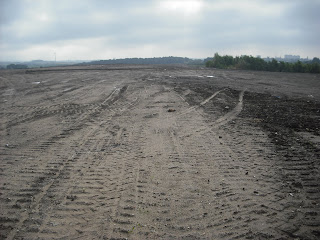 View of the landfill site which is currently being capped.


On Friday, I saw significant progress being made by contractors to complete the capping. In the months ahead, I will make further enquiries about tree-planting and assist in the ongoing monitoring of activities at the site.


Update on 17th June 2012:
The report with the CQA Validation Statement on the capping was finalised in April 2012.  I have viewed the report in the council offices. Trees can puncture the seal and only landscaping with grass is provided.

Posted by ScottishGreenParty at 07:31 No comments:

Entry to the Great Scottish Run 2011

My T-shirt and runner number have arrived in the post. I am going to be part of the 10K on 4th September 2011, which starts at 9.30am from George Square. 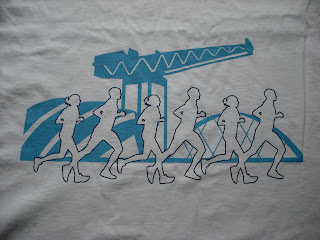 Logo on the T-shirt 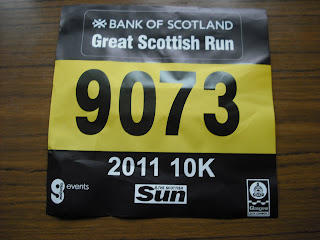 This year, the London 2012 Olympic Torch Tour will be at the race finish. In the lead up to the Olympics 2012 and Commonwealth Games 2014, there is a lot of support for anyone interested in sports or getting more active.

Posted by ScottishGreenParty at 07:08 No comments:

Yesterday, I attended the launch of an exhibition of artwork, poetry and video by women and children who have experience of domestic violence.

The exhibition at the Kelvingrove Art Gallery and Museum provides an opportunity to shared the impact of domestic violence on people's lives with a wider audience, promoting awareness and increased understanding. 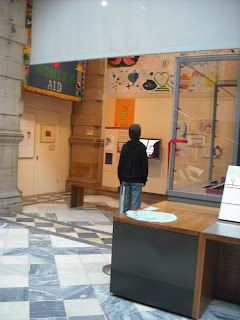 The displays located on the ground floor of Kelvingrove Art Gallery and Museum.

During the launch, there was singing which echoed around the gallery and attracted onlookers and visitors to the exhibition area.


I hope that people find their way to the art work and get a chance to watch the video. It is a very effective way to tell the story of how domestic abuse affects children. 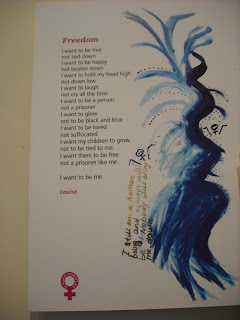 Poem by a women from a refuge.

Glasgow Women's Aid - http://www.glasgowwomensaid.org.uk/
Posted by ScottishGreenParty at 15:26 No comments:

Take a good long look at what you're investing in

As a member of Amnesty International, I received an information pack highlighting that Barclays, HSBC and RBS are investing in companies that make cluster bombs.

The UK has signed up to an international treaty banning the manufacture and use of cluster bombs.

There is evidence that our major banks are making loans, managing assets and providing funds to cluster bomb manufacturers. Therefore, it is necessary to join in the action to send a message to these banks that we will not stand for this outrage.

I have written to ask chairman of RBS to stop investing in companies that make cluster bombs immediately.

Update on 4th September: RBS U-turn - http://www.amnesty.org.uk/news_details.asp?NewsID=19663
Posted by ScottishGreenParty at 14:39 No comments:

Over the weekend, I spent some time in the countryside and enjoyed walking amongst fields of golden barley. 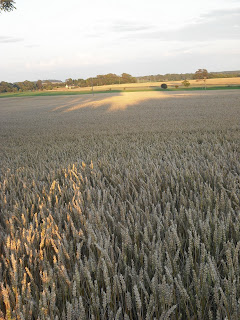 View of barley field as the sun is setting.


The heavy rains in the last week have stopped farmers from cutting crops that are ripe. It is a demanding, difficult situation facing farmers at the moment due to the highest rainfall on record in August.


Today, I was glad to hear about various harvest events taking place in Glasgow. It is great to bring gardeners and their communities together to share the fruit and vegetables produced this year. Go along and get involved in local garden projects.

Posted by ScottishGreenParty at 15:53 No comments:

Celebrating the successes of student protest

The students at the University of Glasgow are bringing their sit-in at the former Hetherington Research Club to an end after negotiating a series of concessions with the Senior Management in recent weeks. 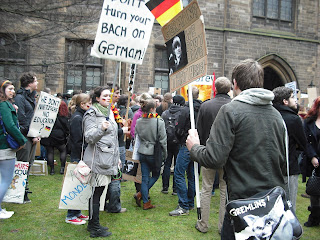 Students gather to protest against cuts
Students have effectively exerted pressure on University Management by occupying the Free Hetherington over 6 months and this has led to agreement that there is a new postgraduate club, no further cuts to courses and no compulsory redundancies at the University.
I have given my full support to the efforts of students to preserve Free University Education and also, backed up efforts to prevent cuts to courses at the University.

It is essential that there is continued support for every student to have the right to participate in peaceful protest.

I will continue to assist students in their efforts to protect Higher Education from austerity cuts.

Posted by ScottishGreenParty at 15:41 No comments:

In recent weeks, I made a visit to Victoria Park to find the Fossil Grove there. It is possible to  travel to this park on the No. 44 bus which is a well known bus service serving the West End. 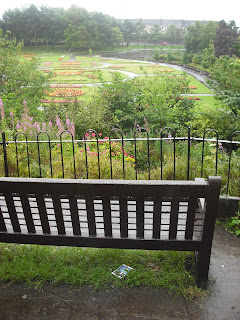 View over the flower beds.

There is a impressive range of activities available at the park including accessible toilets and picnic areas. I enjoyed seeing the birdlife which have adopted the ponds as their home, including swans, ducks and heron. 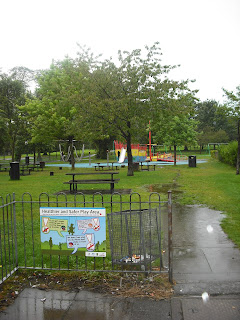 The Fossil Grove is a collection of ancient tree stumps and is described by the Council as " one of the most famous in-situ Carboniferous forest examples in the world." 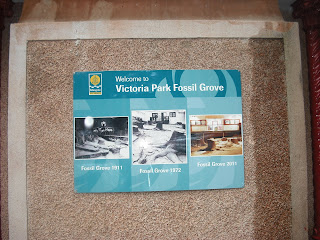 Noticeboard at the entrance to Fossil Grove.

Posted by ScottishGreenParty at 15:06 No comments:

This week, I was concerned to read that Glasgow had the lowest take up in Scotland of breast cancer screening between 2004 to 2010. The women who are most at risk of developing breast cancer are over 50 and living in disadvantaged areas. So, it would seem that more efforts has to be made to reach out to women who are already experiencing stress and health issues from living in poverty.


Women are usually involved in caring for families and often forget to prioritise their own health needs. It is really important that early diagnosis takes place as this is crucial to saving their lives.


I hope that there is discussion with women's organisations working in disadvantaged areas to find out how information about the breast screening programmes and advice services can be distributed more widely.


Women over 50 require support and encouragement from their friends and family to go along to the 3-yearly check ups.


Posted by ScottishGreenParty at 15:25 No comments:

Yesterday, I read about a man from Hiroshima in Japan who was 20 years old when he suffered terrible radiation burns in Hiroshima’s nuclear inferno in 1945 and now, more than 65 years later, the crisis at the disaster-hit Fukushima nuclear power plant is forcing him to relive the horrific situation he faced.

There is a dwindling group of survivors of the US nuclear bomb attack on Hiroshima in the final days of World War II.  Their deepest fears have been awakened due to the leak of radioactive material from the nuclear power plant . 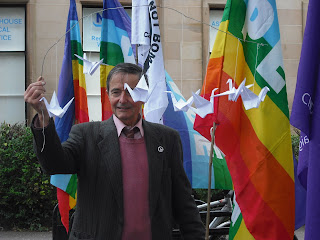 Radiation damages genes and DNA which cannot be fixed by doctors or medical treatments. There is no proper remedy for radiation exposure. Survivors of Hiroshima experienced their shredded skin falling off and unspeakable pain. This year, the ongoing drama at the Fukushima plant, located 800 kilometres from Hiroshima, has left workers exposed to high levels of radiation and similar health risks. 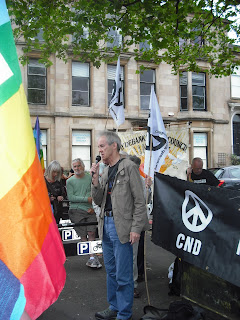 It is clear that nuclear technology cannot coexist with human beings. Those who understand what it’s like to be irradiated consider it is very dangerous.  The after effects of radiation last for many years,  decades.

The impact of the atomic bombs on people’s lives is captured in exhibits at the Hiroshima Peace Memorial Museum. One display explains food contamination, the dangers of radiation exposure and how radioactive elements spread in the air and beyond — the same questions people living near the Fukushima are now asking.

Hiroshima is a thriving modern city with only has one building left that was not demolished after the bombing — the Atomic Bomb Dome.  Between the A-Bomb Dome and the peace museum is the Cenotaph, a giant arch above a tomb inscribed with the names of the victims. In the stone is engraved a promise: “Let all the souls here rest in peace; for we shall not repeat the evil".

Posted by ScottishGreenParty at 14:15 No comments: