This week,  I picked up the leaflet highlighting the changes to the bus numbers and timetables by First Glasgow. Chatting to another bus passenger about the bus changes, we established that the new numbers for bus routes was the most concerning aspect of the changes. 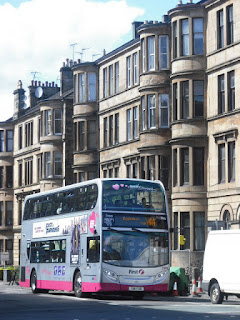 It seems inevitable that the new numbering for bus services will cause confusion. Passengers may find themselves on a journey to somewhere they didn't expect to go. Please let me know your comments and any feedback about the changes. 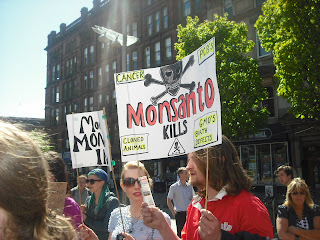 Greens across the world supported this day of protest on 25th May 2013.  Monsanto is a major risk to public health and the environment. I took part in a protest at St. Enoch's Square in Glasgow.

This biotech giant Monsanto and other powerful biotech companies and agribusinesses are exploiting farmers and threatening traditional farming communities. The biotech industry has grown into a monopolistic cartel controlling more than half of the world's commercial seed market. Monsanto has extended its power by making small farmers dependent on Genetically Modified Organism (GMO) seeds, through patents and contracts. 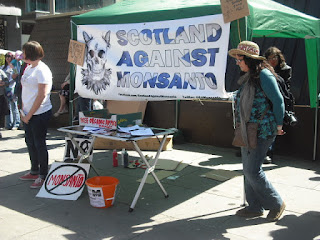 Scotland Against Monsanto Stall at St. Enoch's Square
The reckless introduction of genetically modified organisms into agriculture is wreaking havoc with the environment. Scientists have warned about serious environmental effects of GMO products, including reduced biodiversity, contamination of non-GMO farms and natural areas with GMO seeds and pesticides, loss of diverse "heritage seeds" developed over thousands of years through traditional agriculture, and collapse of bee populations around the world because of neonicotinoids in agricultural insecticides.
The yielding crops pose health risks to people, well as livestock and plant populations. GMO crop strains designed to resist Monsanto's Round Up herbicide and GMO animal feed have led to new and more virulent plant, animal, and human diseases.

We must hold Monsanto and its executives accountable for the damage they're causing around the world. On Monday, 27th May 2013, three petitions relating to GMOs are going to be discussed in the Committee of Petitions of the European Parliament. Our Greens/EFA MEPs will be in the Committee, defending the petitioner and will remind all of the call for a moratorium on all GMO authorisations while the scientific expertise on GMOs has not been satisfactorily reshaped.

Posted by ScottishGreenParty at 15:20 No comments:

Efforts to bring together businesses in the area for mutual support and assistance in dealing with various economic pressures are moving forward.

At the last meeting of the Byres Road Trader Association, a management group was formed and officer bearers elected. Discussions are progressing to address concerns about the number of vacant units, investment in public realm, parking and refuse bin provision. 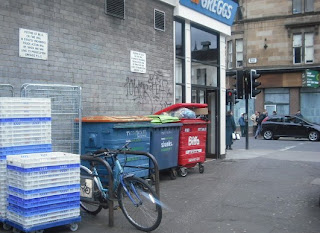 
The next meeting of the Byres Road Traders Association on 28th May at 5 - 7pm, in the Hilton Glasgow Grosvenor Hotel, 1 - 9 Grosvenor Terrace, Glasgow, G12 OTA.  This is an open group that any business can access and contribute to.

Businesses can join up to a Byres Road Traders Association at www.linkedin.com

There is a planning application to convert the vacant building at 8 Novar Drive into a “Class 1” retail space with additional office space. The size and scale of this proposal could incorporate a supermarket.

There are grave concerns about the traffic congestion and road safety from any retail use of this site as it is in close proximity to a “Firebreak” Safety Barrier across Novar Drive. 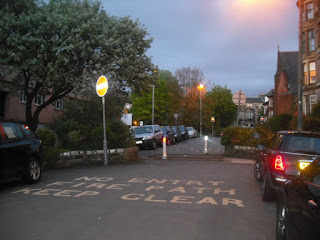 View of the fire break on Novar Drive
There will be an inevitable increase in traffic volume from customers and lorries accessing the proposed supermarket which will adversely affect this quiet residential area of Hyndland. It already suffers from significant congestion, particularly at rush hour.

Additional parking problems will result from this retail development. Serious community safety issues could arise due to traffic linked to the retail development. Lives could be put at risk from parked vehicles if they block the fire break on Novar Drive for fire engines and delay firefighters in reaching an emergency. The proposal does not provide any dedicated parking spaces. A detailed Traffic Analysis is required.

Posted by ScottishGreenParty at 15:50 2 comments:

This week, speculation continues about the businesses moving to the empty units on Byres Road. There is some good news with a refurbishment underway at the former Anderson's fruit Shop. I am very glad that there is a new business setting up. 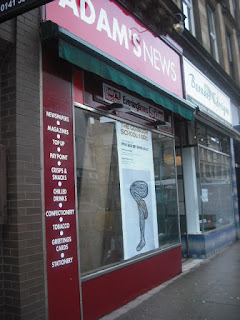 Hopefully,  a series of new retailers will be opening in the next month or so. Byres Road can look forward to a boost from the various events at the West End Festival. I am really looking forward to the Mardi Gras Parade along the closed road on the afternoon of Sunday 9th June.

Posted by ScottishGreenParty at 14:32 No comments:

This morning, I completed the Women's 10K in an hour and 11 minutes. I really enjoy taking part in this special running event through the streets and public parks of the Southside. This year, I am making a donation to the Glasgow Women's Library. 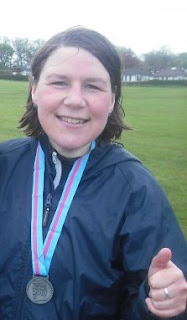 After crossing the finishing line and celebrating with some other runners, I chilled out with a walk through the grounds of the House for an Art Lover and the colourful walled garden in Bellahouston Park. 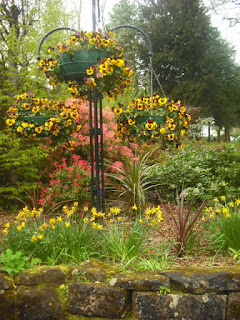 I have been involved in regular jogging activity for many years now. It is really good way to keep fit and feel healthier.


Posted by ScottishGreenParty at 14:36 No comments:

There is a campaign to highlight that for every £1000 you may invest today, there is a guaranteed return of 1000 tonnes of CO2.

The more that is invested by the top five UK banks, the more funding is available to contribute to CO2 from fossil fuel extraction, processing and carbon-intensive energy production. 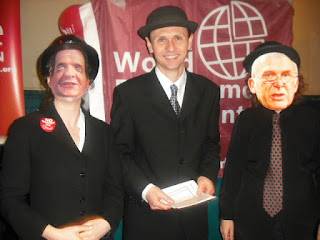 Activists from the World Development Movement are highlighting how these banks are financing CO2 emissions through investment in fossil fuel companies.

At least 300,000 people die each year as a result of climate change and 99% of these deaths occur in developing countries.

Find out how to take action to stop bankers funding climate change, log on to: www.wdm.org.uk/carbon-capital
Posted by ScottishGreenParty at 15:55 No comments:

The maintenance problems in some of the back lanes is causing an ongoing headache for residents. There are lanes that are very mud, have poor drainage, and gather what seems like mountains of litter. They are unsightly and a health hazard. 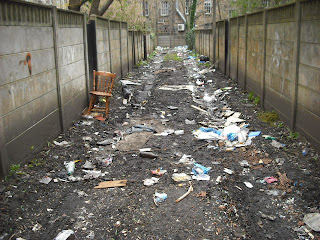 One of the lanes in Woodlands needing investment.

I am continuing to work with residents, council officials and local groups to identify resources to get the lanes improved and give support to residents organising their own lane projects. 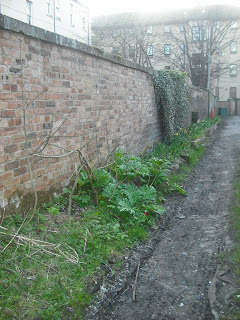 Another lane cleaned up and planted with bulbs
Some residents have managed to coordinate clean ups and access tools to remove the mud with support from Clean Glasgow and Woodlands Community Development Trust. This has been a lot of hard work and involves ongoing effort by dedicated volunteers.

Posted by ScottishGreenParty at 15:35 No comments:

This week, I have been investigating the process for requesting some trees are covered by a Tree Preservation Order.The Council does require is a clear location of the trees concerned and if possible, an indication of ownership if known. 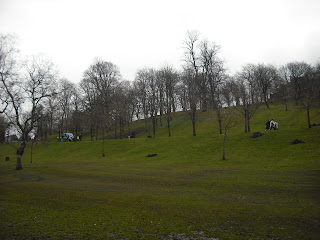 Currently, the council policy does not impose Tree Preservation Orders on Council owned land as it does have no powers of enforcement in such cases.

Trees on council land are covered by a policy approved in January 1996, re-affirming a previous policy from 1972, that “All trees on council land are deemed protected as if through Tree Preservation Orders. All work in respect of such trees to be delegated to the Director of Parks and Recreation (Now Land and Environmental Services) through his Arboricultural Officer. No notifications will be necessary in respect of these trees except where they are within a Conservation Area or identified as strategically important or exceptional.”

For any request, information such as photographs is deemed helpful in defining which trees are involved, and details should be provided giving an indication of whether the trees are to be preserved under Amenity, Cultural or Heritage reasons and if any distinct developmental pressures affect the trees.

I am now in the process of preparing a submission for a tree preservation order and will give further updates on how this goes.

The planning application to remove and restore George Square Statues with reference number 12/02178/DC has been withdrawn.

A full copy of the decision notice can be viewed at https://publicaccess.glasgow.gov.uk/online-applications//


In November 2011, I wrote to strongly object to this proposal to remove, for cleaning / restoration, the statues, and monuments, in George Square, with the exception of the Cenotaph.

A new planning application for an amended proposal to revamp George Square is expected in the near future.

Update - 2nd May 2013, a new planning application 13/01067/DC has been  submitted for the "Resurfacing and formation of two landscaping beds".
Posted by ScottishGreenParty at 13:53 No comments: