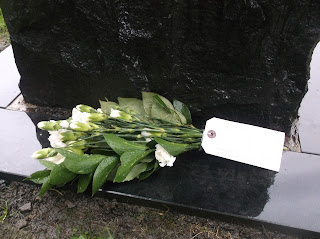 I understand that Azerbaijanis living in Scotland and around the globe observe 26th February every year as a day of remembrance, honouring the victims of the Khojaly massacre, and hope that, through highlighting the anniversary of the tragedy, international efforts to find a lasting peaceful resolution to this long-standing conflict will be renewed.
Posted by ScottishGreenParty at 14:18 No comments:

Yesterday, I supported a peaceful group standing up for abortion rights and pro-choice in George Square. We protested at the plans by "40 Days for Life" for using tactics of intimidation and harassment towards women accessing family planning services provided by the NHS. Women who are choosing to access abortion services are systematically targeted and pestered outside clinics in Glasgow. 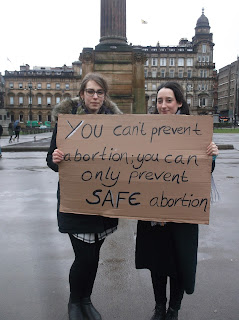 Pro-choice activists called for women to not only be guaranteed safe abortions, but also safe passage while accessing services. 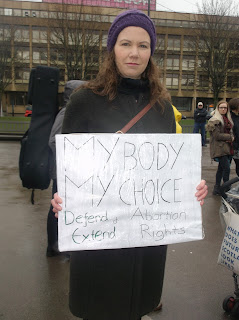 Research by the Abortion Rights Campaign has highlighted that anti-abortion gatherings around clinics causes significant distress to women and invades their right to privacy. 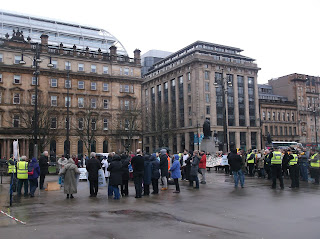 Whilst the limited number of people who have religious objections to all abortions are entitled to their views, it is not acceptable that they are allowed to harass women accessing abortion services in Glasgow.  Further information from Abortion Rights Campaign at: http://www.abortionrights.org.uk/blog/
Posted by ScottishGreenParty at 14:05 No comments:

Support for Woodlands Clean Up

Today, I supported a clean up by volunteers organised by Woodlands Community Development. This involved tidying up rubbish dumped in the lanes across the area. There were mattresses, furnishings and builder's waste to be uplifted. 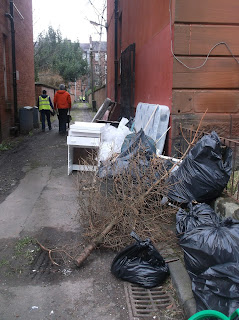 Clean up of a lane underway.

There have been monthly clean up over the last 6 months and this is helping to ensure the back lanes are kept clear of rubbish. Local residents who volunteer are able to socialise and get to know each other as part of the clean ups.
Posted by ScottishGreenParty at 14:44 No comments:

There are three multi-storey flats within Cedar Street owned and managed by Queens Cross Housing Association. This week, I met with staff involved in the work to refurbish these flats over the next year. 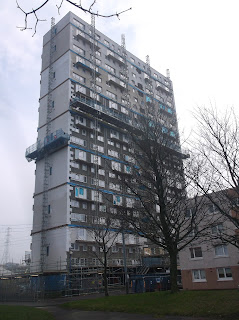 View of one of the multi-storey flats.

I was given an update on the progress of the contract works and arrangements for sharing information with tenants in the multi-storeys whilst the refurbishment takes place.

Further details available at:
https://www.qcha.org.uk/housing/cedar_investment_works
Posted by ScottishGreenParty at 14:30 No comments:

GLASGOW GREEN COUNCILLORS BUDGET TO PROTECT PUBLIC SERVICES AND PROVIDE RADICAL NEW TRANSPORT PLANS FOR THE CITY
Green Councillors in Glasgow are looking to capitalise on the £17m extracted from the SNP by Green MSPs in Holyrood with their budget proposals for the city, including the protection of local services and radical new transport plans for the city.
Glasgow’s Green Councillors will push to reverse planned cuts to community safety, school janitors and sheltered housing as Glasgow City Council meets to discuss its budget for 2017-18 on 16th February 2017.
Our proposals seek to head off some of the worst cuts to services which people in Glasgow hold dear. However, we should also spend wisely just now to create extra savings in the future. The Green budget motion tackles pressure on community services like schools, libraries, street cleaning and street lighting. It seeks to protect the interests of our lowest income citizens and invests in services which build for the future. I hope that other parties will follow our lead.
Among the Green Proposals are rejections of a £1.2m cut to community safety services which have seen staffing slashed and services to local neighbourhoods reduced; of a £888k cut to Glasgow Life; of a £515k cut to janitors in schools; and knocking back cuts of £1m to Sheltered Housing.
At the same time the Greens propose extra money for safe and clean streets. The group has set aside £200k for ‘Superenforcer’ wardens to take action on fly-tipping, dog-fouling and anti-social behaviour; £1.5m for 75 new frontline street cleaners in a Clean City campaign; and £2.2m for Green tenement wheelie bins to replace metal bins.
Green Councillors have also put forward £19.3m for a scheme of upgrading to LED street lights and lampposts, aiming to reduce energy costs and repair bills.
Additionally, they have pledged to plug a £3.3m funding gap in flood prevention projects and providing £2.5m for replacing 30 oil-fired boilers in schools with a low carbon option.
Alongside Green action against cuts, public transport is at the centre of Green plans with £1m new money set aside for improving transport in Glasgow.
Other parties complain about bus cuts but simply beg the private companies to look again - Greens are bolder. We believe it’s time to get on board with buying publicly owned electric buses and cleaning up the dirty diesel buses whose exhausts are poisoning Glaswegians. Until government brings so-called public transport properly into public control, our vision is to work with SPT to gradually build a clean, publicly owned, Electric Overground fleet and have SPT, as a publicly accountable body, managing the service contracts.
As a first step in this radical plan for clean Green public transport, Glasgow’s Green Councillors have set aside £800k towards purchase of publicly owned Electric Overground buses to operate in a new city Low Emission Zone on routes complementary to the subway. Greens have also set aside funding to fit pollution cutting diesel filters to help clean up current operators while the fleet grows.
Measures for active transport feature highly in budget plans with Greens putting major investment into renewed pavements and separate cycle routes. £4.5m of extra money for safer pavements across Glasgow and long proposed segregated cycle ways for the East End and North of the city at a cost of £8m.
Road users are also considered with Greens are also investing £5.3m in emergency repairs to the Clyde Tunnel which SNP transport ministers have refused to fund.
Greens balanced budget plans are wide ranging, with eye-catching measures across the board including the reversal of cuts to teaching resources for English as a Second Language in schools; taking development of local currency plans to the next level; support for a Basic Income pilot project scheme for Glasgow; measures to increase transparency of decision making; as well as delivering on food waste recycling across schools and other council facilities to comply with Waste Regulations.
Finally, the Greens say that it is vital to use the extra money this year to reduce pressures in future years so they support accelerating a renewable energy development programme which seeks to invest in energy efficiency, renewable energy generation and waste prevention.
Posted by ScottishGreenParty at 14:02 No comments:

I was impressed to find an information board about the history of the Sixty Steps next to the River Kelvin. This has been possible with funding from the Stalled Spaces Initiative, a project to transform neglected sites initiated with the support of Green Councillors. 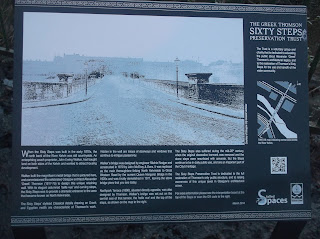 Information board about the Sixty Steps 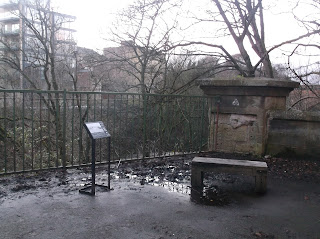 View of the information board next to the River Kelvin. 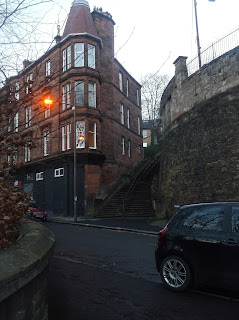 View of the Sixty Six Steps.

Further background about the preservation of the Sixty Six Steps is provided at:
http://www.sixtysteps.org.uk/
Posted by ScottishGreenParty at 13:08 No comments:

Last year, I was delighted to support the establishment of a glass recycling point on Belmont Street. Recently, due to a high level of demand, this site has expanded to provide two glass recycling bins for community use. 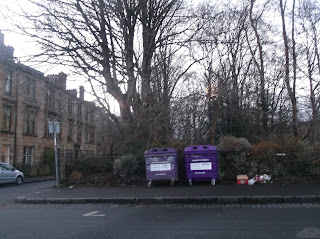 Currently, glass recycling for tenement properties rely on street bins for glass recycling. If you are aware of any streets that would benefit from a glass recycling bin, please let me know.
Posted by ScottishGreenParty at 12:54 No comments:

Last Saturday, I went along to a party to celebrate the achievements of people involved in the Children's Wood and North Kelvin Meadow. The open space at Clouston Street has planning permission for a community garden and woodland area managed by the Children's Wood. It is possible to go ahead with the plans as a result of a housing proposal being rejected. 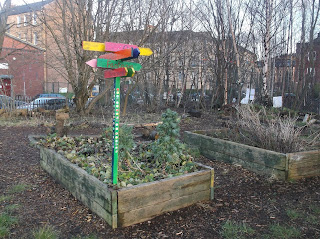 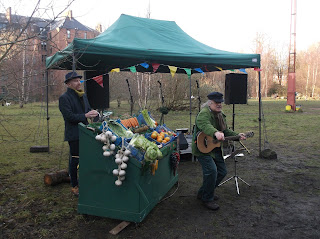 Barrow Band perform at the Celebrations 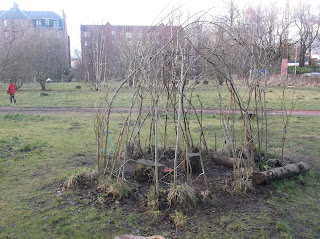 View of the North Kelvin Meadow and Children's Wood

After many years of campaigning by the local community, this site is now zoned as greenspace and established as part of the Glasgow West Conservation Area. I have consistently objected to sale of this land by the Council for a housing development. It is now going to be retained as open space and much appreciated community asset.

Posted by ScottishGreenParty at 12:50 No comments: