Recycling has been a constant concern for residents over the summer. Blue bins for cans, paper and plastics seem to have been either overflowing and not being emptied often enough or in short supply.

I am working with council staff to improve the situation. However, it does appear that there are not enough staff and resources available and this is not acceptable if the city is to deliver the recycling targets that we require to meet. Some back lanes and backcourts require to be upgraded to accommodate recycling facilities. 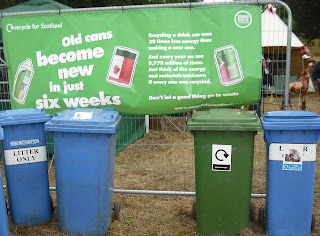 The benefit of recycling aluminium cans is highlighted by Zero Waste Scotland in their publicity. I support stronger partnership working between public agencies, and local projects concerned about recycling to ensure that residents can recycle effectively.


Posted by ScottishGreenParty at 15:53 No comments:

In the last week, a new study has put Glasgow as one of the saddest places to live in the UK. This jars with me as I think of Glasgow as one of the best places to be, especially on a sunny day. Glaswegians are known for being friendly and chatty, good at putting on a party, and like to get out and enjoy themselves. There seems to be generally a glass half full view of life.

I know that people can be grumpy and they certainly let me know if they are unhappy about the state of the place. Lack of jobs, benefit cuts, racism, littering in the streets, parking problems, and financial hardship are top of the list of concerns at the moment.

What can we do to help get us through the ups and downs of life in Glasgow? Perhaps, we should go on holiday to Orkney or the Shetland Islands to see what they get up to. How can they be so much happier? Less air pollution, a healthier environment and more of a community spirit which brings people together may provide some of the answers.

I think that we have to appreciate the opportunities that Glasgow gives us. Making the most of and taking care of our greenspaces, public parks, art galleries, musical talent, pubs and clubs is a start. We all need to build better relationships which ensure that our families, friends, neighbours and the wider community can live safely and not in fear of violence or abuse.


I would be glad to hear anyone's views on happiness in Glasgow.

Measuring our national wellbeing, where we live - http://www.ons.gov.uk/ons/rel/wellbeing/measuring-national-well-being/where-we-live/index.html
Posted by ScottishGreenParty at 15:27 No comments:

How can we tackle tax dodging in developing countries?

It is widely recognised that tax dodging by some of the big companies is taking place. This is a huge drain on the world's resources.

In recent days, I read about the Action Aid's campaign to highlight that developing countries are loosing three times more to tax havens then they receive in aid, annually.

The pressure on the international bodies such as the G20 has to be increased to make companies publish basic set of accounts in every country in which they operate. Aid money is required to help developing countries to strengthen their tax authorities.

Lost tax revenue is desperately needed in developing countries to help the one billion people who are starving and 67 million children who don't attend education.


Posted by ScottishGreenParty at 13:00 No comments:

At the weeked, I picked up a leaflet "Save a tasty £430 a year!" which helps households to avoid wasting food. It states that over 560,000 tonnes of food waste are discarded annually.

Top tips suggested to reduce food waste include:
- Before going to the shops, check what is in your cupboards, fridge and freezer
- Meals can be planned and a list of ingredients to buy written out
- Only buy what food you need, especially fruit and veg
- Rotate the food you have stored so that any food at the back is not missed out

There are recipes and further advice available from local community food projects and Zero Waste Scotland.

Linking up with other Green Councillors

During the weekend of 14th and 15th July, I made a trip to Brighton to meet with Green Councillors from across England to share ideas and experiences from local government.

One of the sessions covered the experiences of Brighton Green Councillors. The use of the One Planet Living Framework and the public consultation on the budget proposals using participatory approaches were highlighted. There has been substantial investment to promote sustainable transport and encourage cycling. This includes the new dedicated cycleways on Old Shoreham Road which supported cyclists commuting in and out of Brighton's town centre.

The development of I.T. strategies to reduce carbon emissions and energy consumption was discussed with reference to the life cycle approach. Various studies have highlighted that globally, I.T. is responsible for more carbon emissions than aviation. Intiatives are developing across local councils to reduce carbon and links were provided to research to inform decision-making.

How Clean is Your Cloud (Greenpeace April 2012) - http://www.greenpeace.org/international/en/publications/Campaign-reports/Climate-Reports/How-Clean-is-Your-Cloud/

Since 2006, I have been in regular correspondence with residents who care about preservation of the open space located on Southpark Avenue. 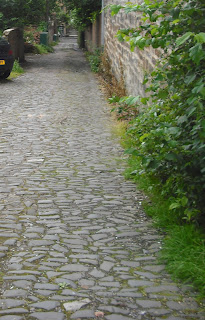 In recent weeks, Glasgow City Council has agreed to take direct action in respect of the above site. This involves the council completing works required under the Enforcement Notice issued in April 2011 and then billing the owner. A contractor has been employed to complete the following activities:-

a) Reinstate stone boundary wall to its original length, height and width with rubble stone and cope to match the appearance and materials of the remainder of the wall.

b) Remove all red and other blaes materials from the site.

A residents group is discussing plans for the future maintenance of the site for the wider benefit of the community.

Posted by ScottishGreenParty at 11:32 No comments:

Today, I was given a tour of the North Woodside Leisure Centre, located at Braid Square, which is undergoing major refurbishment. This building was originally North Woodside Baths and Washhouse which opened to the public on 13th August 1882.

The roof of the swimming pool was damaged by the stormy weather in January 2012 and this has led to additional repairs being required. Scaffolding is filling up the area of the swimming pool at the moment. This is to enable roof works to be undertaken as well as internal painting. 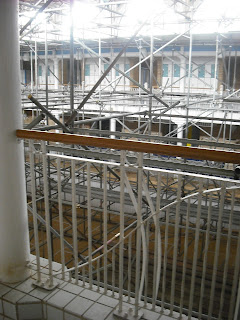 View of the scaffolding. 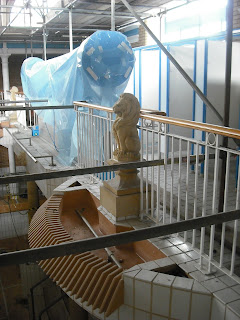 One of the pool covers and the Lion Water Feature.

The refurbishment has also involved a fit out of the sauna suite and steam room, and replacement of operating equipment. It is a much more energy efficient building as a result. This investment is a welcomed boost for the Woodside area. I look forward to the re-opening of this unique swimming pool in the Autumn.


Please note that the Leisure Centre's Gym and Dance Studio are not affected by the refurbishment and remain open as normal.

Today, I made a trip by train and bike to the North Gate at Faslane Naval Base to take part in the Rise Up Singing as part of the 30th Anniversary Events for the Faslane Peace Camp.

The cycle from the train station in Helensburgh involved using a dedicated cycle route for most of the way. The sun came out, and so I stopped to enjoy the views of the Loch and Helensbourgh's yachts along the way. 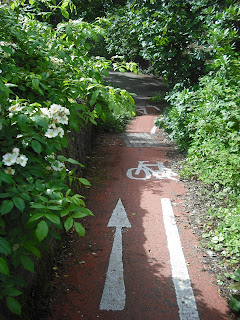 View of cycle route near the Faslane Peace Camp.

Protest in Harmony provided song sheets and helped inspire singing throughout the afternoon. One of the songs was called Bury Trident by Leon Rosselson, arranged by Red Leceister Choir was performed. It features a chorus;

"Trident, Trident, Money down the drain,
It can kill all living creatures and then kill them all again.
It's time we got together and it's time we made a fuss;
So that we can bury Trident,
Before it buries us." 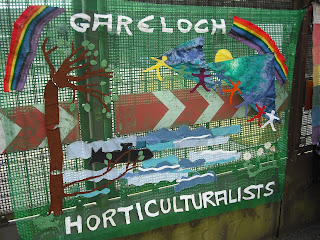 Banners were displayed at the North Gate.

Various singers were involved including women who had helped set up the Faslane Peace Camp. I was really enjoyable to meet up with members of the singing group and I have learnt new protest songs which promote peace and justice.

Posted by ScottishGreenParty at 13:40 No comments: