A journey along Queen Margaret Drive 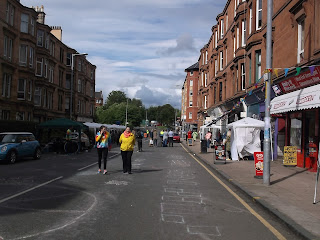 The Hillhead ward covers a section of Queen Margaret Drive including the taxi rank and heritage features such as the Queen Margaret College designed by Charles Rennie Mackintosh. In recent weeks, there has been an exhibition in the Kibble Palace highlighting the importance of the G20 area and it is focused on gathering support for Queen Margaret Drive. 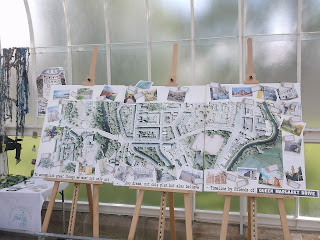 I have agreed with organisers of the exhibition to assist in promoting a well maintained, safer and less polluted street. Investment is needed in reducing traffic pollution and expanding cycle friendly aspects. The work by the Queen Margaret Drive Traders Association can link up with the plans to developing business opportunities within Byres Road. Business interests can work together to support Glasgow's West End.


Posted by ScottishGreenParty at 15:43 No comments:

The Arches and Glasgow's Cultural Strategy

Today, at a meeting of the Finance and Audit Committee, there was discussion about the risks affecting Glasgow City Council for 2015-16.

A report detailing the risk register recommended that the risks associated with the implementation of the Cultural Regeneration Strategy have reduced. Reference was made to the 2014 Cultural programme and subsequently, the successful activity involved in promoting investment in our cultural assets including lottery funding of the Burrell.

I felt it was necessary that questions were raised about the status of the Cultural Regeneration Strategy in light of the closure of The Arches, last week.

I asked about whether evidence of the economic impact of the closure would be considered by council officials who oversee the development of the risk register. In response, I was informed that evidence would be gathered and taken in to account in an updated version of the risk register provided to the committee in 6 months time.

Hopefully, I have helped to ensure that the economic impact of the Arches is given further attention. I first became aware of the building as a student attending the "Glasgow's Glasgow" exhibition based there in 1990 City of Culture. It has continued to be a destination for me over the last 25 years - for a meal, for a gig, for a dance, to see a play, to attend a conference or enjoy an art exhibition. It had so much to offer...

Glasgow's Cultural Strategy - https://www.glasgowlife.org.uk/policy-research/cultural-strategy/Documents/GlasgowsCulturalStrategyMaindoc.pdf
Posted by ScottishGreenParty at 15:34 No comments:

Dumping of bulk items in Woodlands

The dumping of bulk items on the pavements of Woodlands has been a major issue in recent weeks. The obstruction caused by various items of furniture left on the pavement is a nuisance to pedestrians and is a source of community concern. It creates an unnecessary eyesore within a conservation area which has supported the award winning, Woodlands Community Garden. 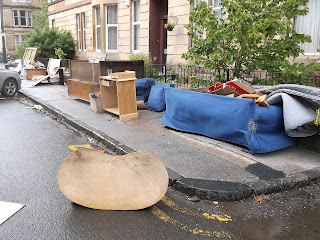 A large part of the community concern has arisen from the number of privately furnished flats in the neighbourhood of Woodlands. The landlords or managing agents of these flats do not always ensure they dispose of any unwanted furniture for recycling or reuse.

There are council officials from Environmental Health and the HMO Unit who are monitoring the dumping of furniture in the area and they will take enforcement action to ensure that furniture is disposed of appropriately.

During the last week, I have walked up and down Great Western Road on several occasions. I was glad to find council funding has been used for tarmac to resurface poorly maintained areas around Kelvinbridge. Residents have been asking for these repairs to be carried out for many months. 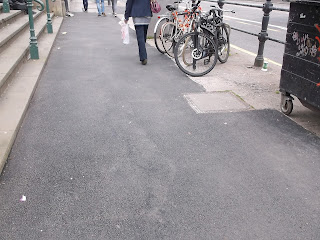 There are still areas of pavement within Hillhead that require to be repaired. The process of submitting requested for improvements to our streets is ongoing.
Posted by ScottishGreenParty at 13:38 No comments: 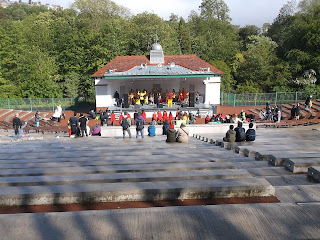 Posted by ScottishGreenParty at 13:20 No comments:

Opposition to the Cathkin Relief Road

As you may be aware, the Glasgow and Clyde Valley City Deal is proposing a new road-building project known as the Cathkin Relief Road at a cost of approximately £20m. I have met with the local campaigners who are calling for a halt to the plans. 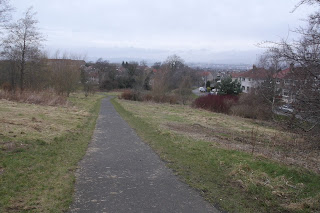 Footpath through the greenspace to be destroyed by the new road.

The reasons are listed in objections to the planning application for the road, CR/15/0087 (formerly CR/15/X0093/new). It is proposing the construction of the Cathkin Relief Road from the West End of Cathkin Bypass continuing to Fernhill Road/Mill Street, by South Lanarkshire Council. I have objected on the following grounds:

1.0 Loss of Amenity
The proposed construction of this road is on a Greenfield site which is regularly use for walking, dog walking, cycling, jogging, playing by children, as a through route to Nursery or Primary school. It is an open space used for recreation and offers community facilities for fresh air and exercise.

There are no similar facilities within easy reach of the area and the loss of this ground for the construction of a road, would in my opinion be detrimental to the amenity of the surrounding area. This area of ground between Blairbeth, Fernhill and High Burnside, was turned into a park for the community, after public consultation in 2000, with the work completed in 2001. South Lanarkshire Council’s presentation drawing dated 4th October 2000 states: "The final stage is putting this plan into action. The result will be a park for all the community that provides for many different users and is a credit to your communities". The loss of paths and greenspace would be detrimental to the amenity of the area.

2.0 Loss of Visual Amenity
The proposed construction of this road would affect the visual amenity of the areas. The proposed introduction of sound barriers, 2.0 and 2.3 metres high, along major stretches of the road would have a detrimental effect on the outlook of many of the existing residential properties and would create a visual, physical and physiological division between Fernhill and Blairbeth/High Burnside. The proposed use of such visually incongruous barriers in a residential area would have the effect of enclosing areas and totally changing the open nature of the whole area and would have a negative impact on the visual amenity of the area.
3.0 Noise and Air Pollution
The proposed construction of this road would greatly increase the noise and air pollution in what is a quiet tranquil space which any local residents or visitors use for fresh air and exercise. For South Lanarkshire Council to claim that this proposal would improve air quality in the area is incorrect as the 2007 STAG Report identifies this as a major negative. There are three primary schools in the immediate vicinity of the proposed road and the increased air pollution will have a detrimental effect on children and is contrary to current government policy on the reduction of pollution near schools.
The proposed introduction of traffic into a quiet parkland area will result in an increase in noise pollution in a quiet residential area. The proposed use of sound barriers will be visually intrusive and will merely channel noise to the various openings in the barriers. The increase in noise and air pollution would be detrimental to the residential amenity of the area.
4.0 Impact on the Wildlife and Natural Environment
There is a considerable amount and variety of wildlife in the area of the proposed road including Foxes, Weasels, Deer, Bats, a large variety of birds including Owls. Many of these are protected by law as are their habitats. It is an offence to disturb bats or to interfere with birds during the nesting season. The proposed road would result in disturbance to and loss of the natural habitat for many of this wildlife. The considerable loss of natural green space, including an area of Bio-diversity, and the effect on wildlife and their habitat would be detrimental to the amenity of the area.
5.0 Impact on the character of the area
The proposed removal of the existing beech hedges along both sides of the existing Cathkin Bypass and their replacement with sound barriers, as shown of the proposed landscaping and sound barrier plan No 7, would be akin to vandalism on the area's heritage on a significant scale. The beech hedges have been in place for over 60 years and are a major part of the character of the area. Their removal would be detrimental to the amenity of the area.
6.0 Justification for The Proposed Road
The proposed road has been talked about for over 50 years but has not been previously built due to a lack of need. Latterly the Road was designed with the intention of bringing traffic to the new junction with the M74 Extension to be created at Glasgow Road just north of the Main Street/Mill Street junction. That junction and one other, were omitted for cost savings to allow the M74 Extension to proceed. Therefore a large part of the justification for this Cathkin Relief Road is now not there. Now that £21.6 million of potential funding is available through the new City Deal, sponsored by the Scottish and Westminster Governments, (although SLC have to fund in excess of £3 million of the cost), SLC wish to proceed with this project on the basis that it is part of the strategic transport plan. The traffic figures contained in the 2007 STAG report were compiled prior to the opening of the now opened M74 extension, which has seen a great reduction in traffic on both Blairbeth and Fernhill Roads.

It is clear to all who live in the area that the traffic has reduced considerably and therefore the relief road is no longer needed.  The 2007 STAG Report examined 3 option packages, The Proposed Relief Road being package 3.  Package 3 was marginally favoured but this was based on an anticipated cost of £3.875 million.  The fact that the current anticipated cost is £21.6 million negates the justification for package 3. Traffic flow around the area could be improved by some redesign of junctions and the proposal contained in the Planning Application to alter the junction of Blairbeth Road/Mill Street/Fernhill Road and Croftfoot Road is an excellent example of this and one which I would be fully supportive of.
7.0 Flooding
The proposals indicate 4 large soak-away basins for the collection of surface runoff water. These soak-away basins will utilise much of the remaining green-space and will pose a risk to users of the area particularly children, will be unsightly and as such would be detrimental to the amenity of the area.

The closing date for objections is 10th June 2015.