Noise and vibration from construction of flats at Fergus Drive

This week, residents experienced severe distress caused by the noise and vibration from high impact sheet piling at 127 Fergus Drive.  On behalf of residents, I contacted council officials to seek assistance to investigate the work taking place. Thankfully, this work has been halted as a consequence of concerns raised by residents. 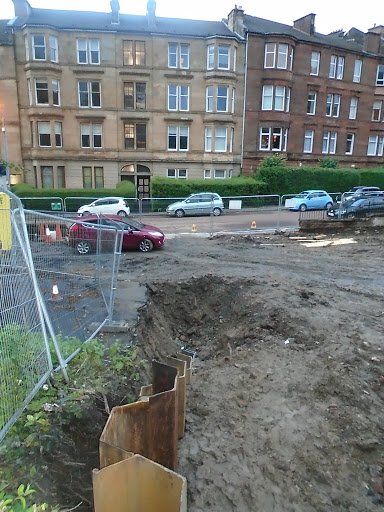 Views of the site showing the piling work and entrance from Fergus Drive. 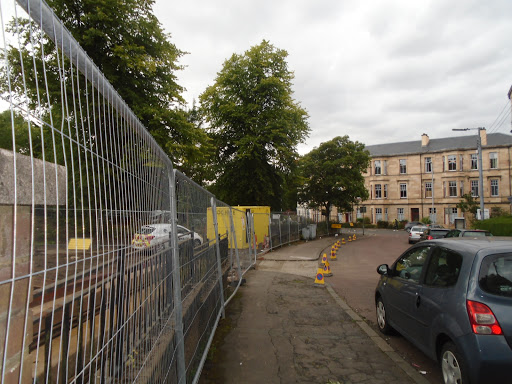 This site is surrounded by an historic landscape and significant listed buildings, within the Glasgow West Conservation Area. To ensure that the heritage of the area is safeguarded, I am concerned to ensure that this situation does not arise again during this construction work.

Posted by ScottishGreenParty at 07:53 No comments:

Yesterday, I noticed progress with completion of the new footway along University Avenue. 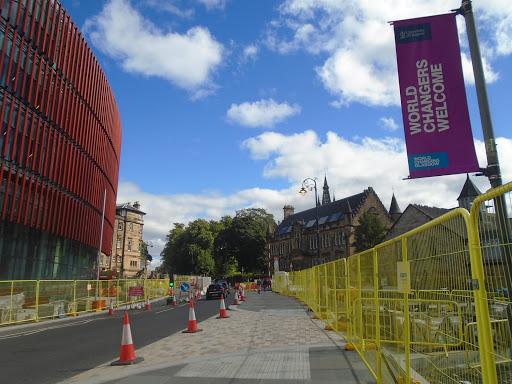 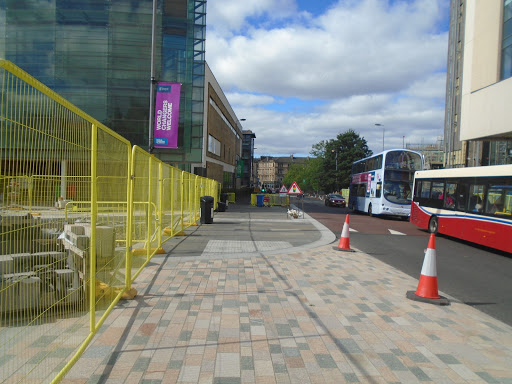 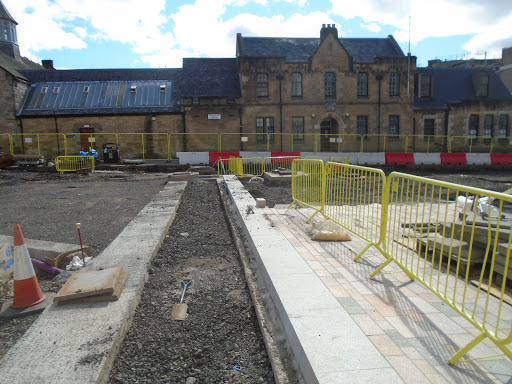 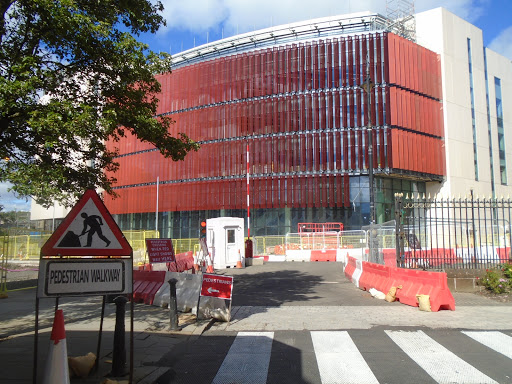 Access to the University Campus from University Avenue at University Place.
There are clearly marked routes for pedestrians to access the campus. Traffic management issues need to be monitored as part of the construction work on an ongoing basis.
Posted by ScottishGreenParty at 07:39 No comments:

Yesterday, I wandered along Byres Road and Queen Margaret Drive to buy some household items. It was busy with shoppers as well as people looking to spend time in the many bars and cafes in the area. 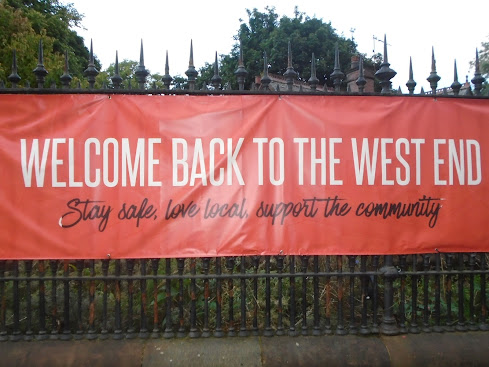 Visitors welcomed back to the West End
with a banner on the railings of the Botanic Gardens. 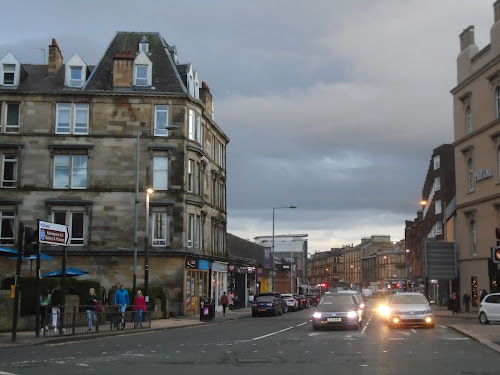 View of Byres Road, from the junction of Great Western Road.
The businesses are wanting to ensure that residents support their local high street and help the economic recovery from the Covid19 pandemic. 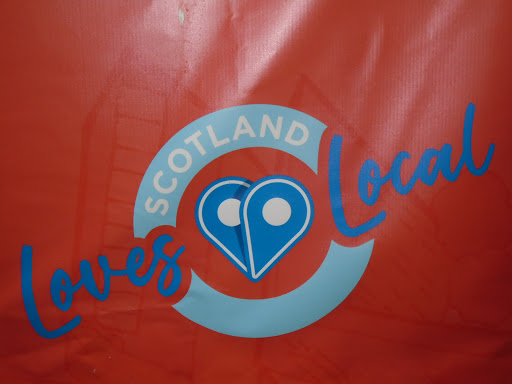 Marketing activities are supported by Visit West End - the Byres Road
and Lanes Business Improvement District and the Scottish Towns Partnership.
Posted by ScottishGreenParty at 07:09 No comments:

On 30th July, I submitted to an objection to a variation of Planning Application Reference number of 19/01763/FUL referring to the site at  65-77 Otago Street, Glasgow. This proposal involves the erection of residential development (49 units) and associated works.

Following a meeting on 22nd May 2020 of representatives of the developer and planning officials, the revised relevant architectural planning drawings which detail the following proposal have been provided;

2.     Block C has been repositioned to sit 18m away from the rear elevation of the existing building at 65-77 Otago Street

3.     Block B has been repositioned to sit 18m away from the rear elevation of the existing building at 65-77 Otago Street.

4.     Block A has been adjusted to provide 2 dwellings per floor over 6 storeys

5.     Refuse and cycle storage for Blocks B & C have been relocated to stores located within each respective block.

6.     Refuse storage for the existing building at 65-77 Otago Street has been provided within a dedicated external storage area.

7.     Amenity area has been increased and natural children’s play incorporated.

Due to number of changes to the size, scale and layout of the residential units made to the original plans by this proposal, it is in the public interest that it is withdrawn and a new planning application with all the relevant drawings and documentation is submitted.  The letter detailing the proposed changes can be deemed as resulting in a substantial variation of the original application and therefore, necessitating another planning application. It is my understanding that this is required under ‘Variation of Applications’ (Section 32A)’, on page 33 of the Scottish Government’s Planning Circular 3/2013 Development Management, paragraph 4.63 states:

Also, I objected to this variation for the following reasons;

The variation would result in the removal of one of four blocks, for all three that are left to move to new positions, redesign these blocks, increasing the height of block A on Otago Lane from 4 to 6 storeys. This would lead to the further loss of biodiversity and a significant reduction in the area of Wildlife Corridor remaining after the developer’s extensive unauthorised removal of trees in the first three months of 2020.

There is a major ecological impact from the loss of trees that has to be recognised. This landscape of this site has been made adversely affected by the felling of trees in anticipation of consent being granted under the present application 19/00592/FUL.

It is not possible to accept the Design and Access Statement detailing, beneath the first diagram under paragraph 3.2: “The design looks to strengthen and enhance this important landscape feature” referring to the Wildlife Corridor. The proposal will actually result in moving blocks slightly further east and therefore, this variation represents more damage to the Wildlife Corridor than was proposed in the original version of the application. It should be acknowledged that in paragraph 3.7 of the Design and Access Statement submitted in February 2019, 1133 m2 Wildlife Area is proposed,  whereas the same paragraph of the statement submitted in May 2020 proposes a reduction of this figure to 950 m2. Please refer to the ‘Area Calculations’ drawings for the original application and the proposed variation confirm these figures.

In Paragraph 5.1 National/Local Guidance of the Design and Access Statement makes repeatedly reference to “Full regard was taken of these guidelines in preparing this design statement.” However, analysis of the information in the documentation does lead to questioning of this statement. 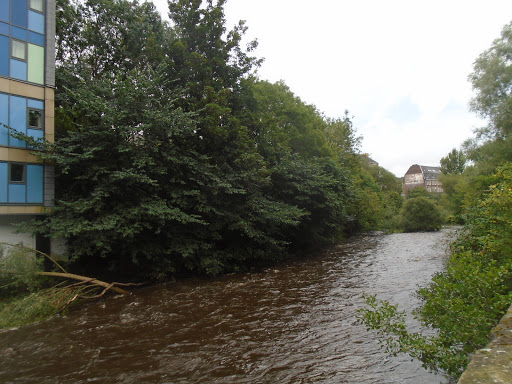 View of the River Kelvin and Wildlife Corridor at Otago Lane

The developer is proposing to build one block (A) to a height of 6 storeys and two blocks (B and C) at 7 storeys high on a historic back lane with mews buildings. This proposal is in contravenation of the overarching Place Making Principle of CDP1.

With reference to the paragraph 2.60 e) of the adopted Supplementary Guidance 1, The Placemaking Principle (Part 2), Residential Development in Lanes and Gardens: “the scale and massing should be in the style of mews housing, up to a maximum height of 2-storeys, or 1 and a half-storeys with dormers in lanes with no existing mews properties;”

The built history of the site has also been described correctly in the proposal’s Design and Access Statement. Otago Lane is part of the Glasgow West Conservation Area and there is no historic precedent for multi-storey buildings of this scale and massing.

With reference to the “adjacent diagram” which “has been prepared as a useful guide” to paragraph 2.8 Storey Heights of the Design and Access Statement, 5 storey buildings in Otago Street are shown, but these are not part of Otago Lane. It is clear that there is no validity to statement that: “the limitation of storey heights to planning policy for lane conditions would be inappropriate”.

In considering this proposal, the storey height of previous industrial developments is not a valid pretext for the height of modern residential developments in lanes, and the previous industrial building on the site were limited to 3-storey. The photograph showing the towering bakery building on the second last page of paragraph 2.12 Site History, in the Design and Access Statement is misleading. It should be noted that the bakery had its lowest storey beneath the ground level of Otago Lane.

3)    Negative impact on the historic environment

The proposal will result in significant views being altered by tree removal, contrary to paragraph 2.16 of the adopted Supplementary Guidance 9, Historic Environment, which states:

“All proposals for new development in, or affecting the setting of Conservation Areas, must:

a) preserve and enhance the special character and appearance of the area and respect its historic context;

b) be of a high standard of design, respecting the local architectural and historic context and use materials appropriate to the historic environment;

c) protect significant views into, and out of, the area;

d) retain all existing open space, whether public or private, which contributes positively to the historic character of the area; and

e) retain trees which contribute positively to the historic character of the area.”

It is major ecological impact from the loss of trees has to be recognised. This situation has been made worse by the felling of trees in anticipation of consent being granted under the present application 19/00592/FUL.

There is a lack of acknowledgement of the interests of established sustainable businesses in Otago Lane. This proposal is jeopardising their ability to continue trading and putting at risk some 30 local jobs. This would be contrary to paragraph 2.14 of the adopted Supplementary Guidance 4, Network of Centres, which aims to “Support the protection of Existing Local Shopping Facilities”. It can be noted that, although not listed in Appendix 1, Otago Lane is recognised as part of an existing Local Shopping Facility within Hillhead.

In conclusion, I am seeking for the Council to ensure that such a substantial variation of an existing application is withdrawn and there is requirement for another planning application to be submitted.

Posted by ScottishGreenParty at 06:51 No comments: