Across the Woodside area, there are sites transformed in to wildlife habitats by wildflowers. I enjoyed a walk through several sites, in the last week. 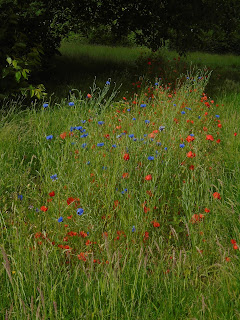 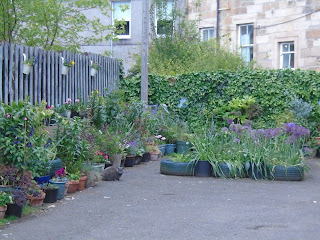 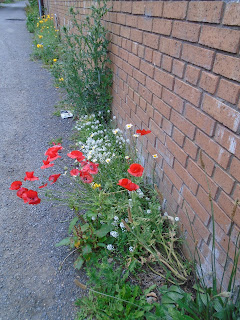 Wildflowers along the wall of Burnbank Lane 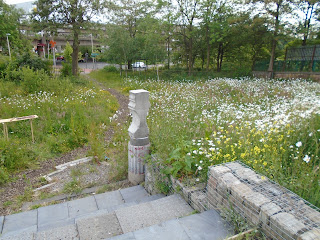 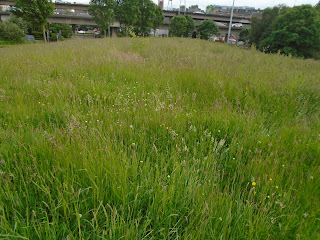 These areas of wildlflowers are supporting pollinators, such as bees and other insects, which benefits local food production.
Posted by ScottishGreenParty at 14:38 No comments:

Yesterday, I was glad to attend the Wilton Street Garden Fete and helped to draw the raffle. It was a lovely afternoon to spend time in the Wilton Community Garden and socialise in the great outdoors. 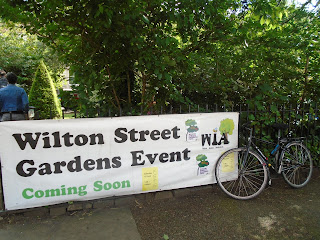 View of the banner at the main entrance the garden.

Thanks to everyone who volunteered on the day and also, to council staff who maintain the garden on an ongoing basis. This is a council owned space for community use. It was designed and created with the support of the Beechgrove Garden.

The main concern of residents is the problem of dog poo on the grass in the garden. Dog walkers are asked to ensure that all dog poo is disposed of in the bins provided.
Posted by ScottishGreenParty at 14:24 No comments:

The improvements to the cycle gate between Doune Gardens and Doune Quadrant have been completed. Investment has been made by the Council in new fencing, signage, kerb stones and road markings. 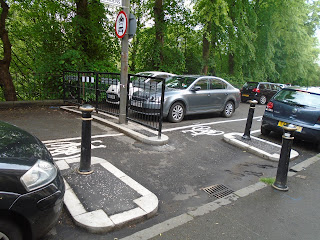 View of the cycle gate

There has been extensive consultation with residents to inform the design of the new cycle gate. The upgrade has resulted in a better route for cyclists to use and this revamp enhances the street's appearance. Thanks to everyone who has contributed to the delivery of this project.
Posted by ScottishGreenParty at 13:31 No comments:

Today, I visited the free exhibition celebrating the activities of Women from Glasgow's West End during WW1. This is displayed at the National Trust for Scotland's Tenement House on Buccleuch Street until 31st July 2019. 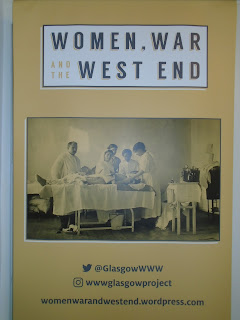 
Posted by ScottishGreenParty at 12:32 No comments:

Councillors have received ongoing complaints regarding inconsiderate parking and road safety issues at school opening and closing times from both parents, residents and schools. Streets around schools often suffer from traffic congestion at the start and end of the school day. Large numbers of school children are put at risk of road accidents, and inconvenience and nuisance is caused to residents by inconsiderate parking, noisy horns, idling and careless driving.

As a consequence, an intimidating street environment for those wishing to walk, or cycle to school results in some parents feeling that they are forced to drive where they would not if they had a choice. Driving children to school has negative implications for children’s activity levels and therefore their health. The Centre for Population Health has produced a briefing on active travel to school highlighting that being physically active has multiple benefits for physical and mental health, as well as for learning.The current Hands Up data from 2008-2015 indicates that in Glasgow on average 53% of primary school children walk to school.

It is recognised that walking, cycling, skating or skateboarding to school can contribute to children being more active on a daily basis. More school pupils walking or cycling to school will mean less traffic on the roads reducing carbon emissions and air pollution.

Please note that transport planners in the Netherlands, and one case study in Reading demonstrate, that timed street closures at the start and end of the school day have removed traffic danger and appears to encourage more walking and cycling.

East Lothian and Edinburgh Councils have implemented restrictions on streets around schools – although these include exemptions for local residents and disabled badge holders. These restrictions have been broad supported. Camden Healthy School Streets Project Feedback collected locally from residents and businesses is broadly positive. Data collected from surveys and a system whereby children record their travel daily indicates that driving to school has fallen dramatically.

In response to complaints and evidence from other councils, I am glad that Glasgow is developing plans for School Car Free Zones to identify the level of interest across the city. I hope that this project will help create a more safe and pleasant environment which encourages walking, and cycling to school.

This month, information is being provided to Hillhead Primary about the pilot for a School Car Free Zone from August 2019 for 18 months. The suggested times are 8:30 – 9:15 and 2.30-3.15pm. The roads could be closed through the use of signage.

In addition we can support the participating schools in running events, cycle training and incentives and rewards to boost levels of walking and cycling to school. This should be considered as part of a range of options for Schools reporting road safety concerns, with this being the default where the school is supportive as it is likely to deliver the best possible road safety improvements and behaviour change impact.

Posted by ScottishGreenParty at 12:14 No comments: