New Artworks on the Canal

Yesterday, I attended an event at The Whisky Bond marking the installation of THEN/NOW, three linked artworks for the Forth and Clyde Canal in Glasgow, commissioned by Scottish Canals/Scottish Waterways Trust. This project was undertaken by Minty Donald, Neil McGuire and Nick Millar. 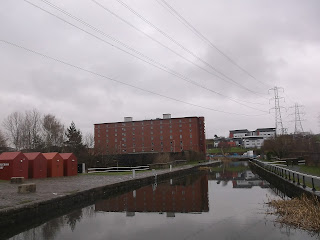 View of the location for most of the artworks, next to The Whisky Bond.

There are carved stones representing the reservoirs of the Forth and Clyde Canal, including Birkenburn, Townhead, Black, Lilly, Hillend, Johnston, Woodend, Bishop, and Lochend. 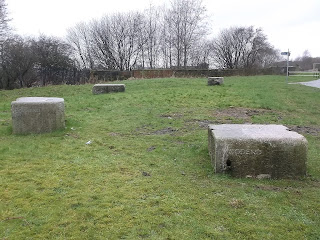 Also, there are seven cast iron ingots marking the distance travelled by a barge laden with 10 tons of timber, under different methods of propulsion. 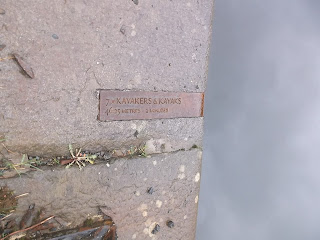 The ingot for the kayaks and kayakers
involved in pulling the barge.

The event focused on the process of making the works and there was a screening of a documentary film by Christopher Quinn.

Further information is available at: http://www.then-now.org/
Posted by ScottishGreenParty at 13:19 No comments:

In the Autumn of 2015, various community issues were raised by residents who live in and around Hopehill Road, within Woodside.

The plastic bins for refuse at the rear of Woodside Health Centre were constantly set on fire. New metal bins have been installed to reduce the risk of fire-raising. 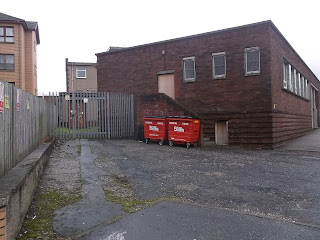 Further along the street, a sign has been missing for many months and it has been replaced to provide clear directions to Hopehill Gardens for visitors and emergency vehicles. 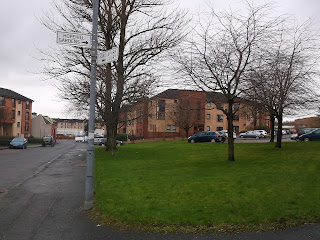 Road safety concerns have been highlighted at the junction of Hopehill Road and Hopehill Gardens. New road markings have been painted to reduce the risk of an accident. 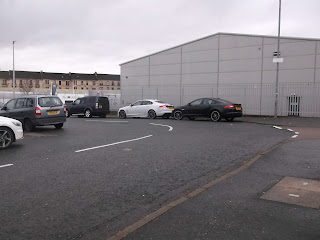 White lines at corner of the road.

The improvements to this street are possible with support from staff at Land and Environmental Services and Woodside Health Centre.
Posted by ScottishGreenParty at 12:59 No comments:

On Tuesday, 26th January 2016, there is a site visit and hearing by the Council's Planning Committee to the open space at Kelbourne St/Sabda St/Clouston St. to determine planning applications for its future use.

I am a supporter for the proposal for the use of this existing open space as a community woodland and park. This ground has never been built on and the Council must acknowledge that the community woodland and park plan is in keeping with the existing architectural landscape of the area. The site is located within the Glasgow West Conservation Area and is a well established, vital greenspace for local nature conservation. 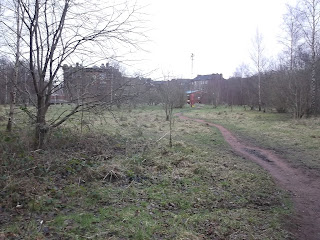 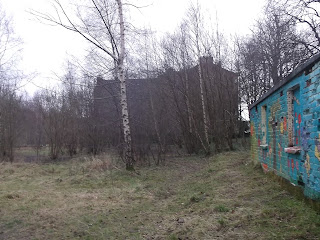 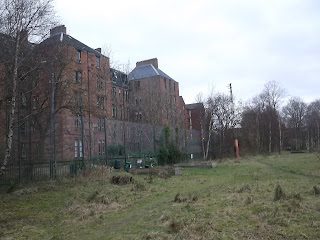 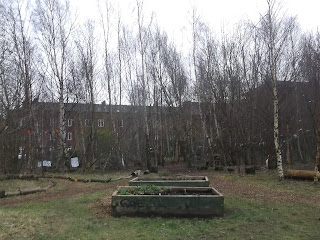 View of the site known as North Kelvin Meadow and Children's Wood.

This week, a report showed that businesses recognise the importance of having access to local greenspace. This new research from the Central Scotland Green Network (CSGN) indicated that "Almost three quarters of Scottish businesses believe urgent action is needed to protect and enhance Scotland’s natural capital." This evidence backs up the case for the plan for the community woodland and park to go forward. The Council can make a real difference by protecting this greenspace asset for use by residents and businesses.

The benefits of the Children's Wood - http://thechildrenswood.com/

UPDATE: On 26th January, the Planning Committee approved plans for a new housing development on the site and also, agreed to the community woodland and park.

Posted by ScottishGreenParty at 05:59 No comments:

Celebrating the heritage of Park Circus

Yesterday, I attended the launch event for the exhibition on Park Circus that takes place at the Goethe Institut, 3 Park Circus from Monday 25th to Friday 29th January 2016, 10am - 8pm. 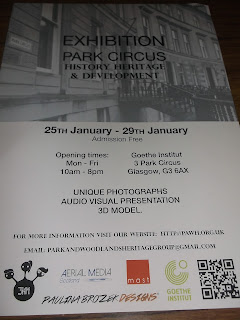 Leaflet for the exhibition

This event celebrated one of the most prominent and architecturally important planned developments in Scotland. Park Circus is recognised as one of the greatest achievements of Victorian Town Planning.

The exhibition displays new and unique photos of the Park Area, an audio visual presentation of the interior of the former Registry Office at 22 Park Circus and a 3D model.

This has been organised by the Park and Woodlands Heritage Group, There is further information available on their website http://pawh.org.uk

Posted by ScottishGreenParty at 05:25 No comments:

There is a cycle route along West Princes Street, St. Georges Road and New City Road. It is busy thoroughfare used by commuters, school pupils and students. I have highlighted the ongoing bulk problems and littering issues on this route to Cleansing Staff. 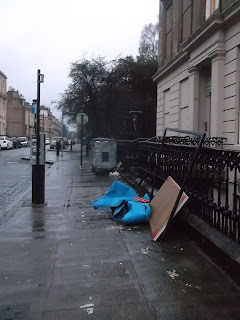 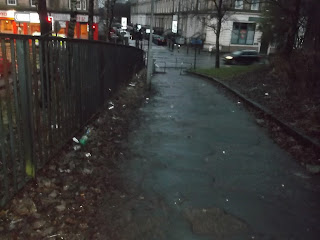 This path is spoilt by littering, overflowing bins and dumped items. We need to ensure that this is a safe, traffic-free route to link residential areas and the city centre,

Posted by ScottishGreenParty at 12:48 No comments:

Littering in the Cobbled Lane, Kelvinbridge

In discussions with residents, I have heard concerns about the littering and lack of street sweeping within the cobbled lane at Kelvinbridge. 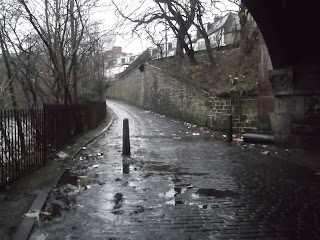 View of the cobbled lane.

A request has been made to the Cleansing staff to clean up the lane and ensure it is kept cleaner.
Posted by ScottishGreenParty at 12:26 No comments:

Support for community-led innovation and design

During the festive break, I made it along to the Turner Prize 2015 exhibition at Tramway. The winning entry about the Granby Workshop in Liverpool by Assemble had been highlighted as worth seeing. This is a example of the impact of community action, when the demolition of neglected housing is prevented and re-use projects are able to thrive. 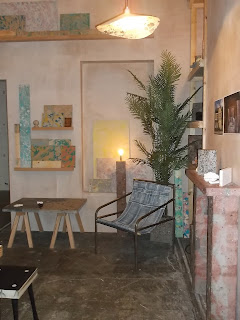 View of the exhibition by Granby Workshop at Tramway.

I picked up a newspaper about the Granby Workshop for further background reading. It is an impressive project which supports a social enterprise selling handmade products. Further details are available at: http://www.granbyworkshop.co.uk/pages/about-us

In Scotland, 2016 is Year of Innovation, Architecture and Design. I hope that it leads to community-led projects involved in regeneration and re-use gaining further investment. The Lighthouse in Glasgow will be centre stage, as one of the top 100 buildings of the last century, and participant in the Festival of Architecture 2016.

Festival of Architecture at: http://www.foa2016.com/

Posted by ScottishGreenParty at 13:23 No comments:

This week, I was dismayed to find that Woodside Library was closed and a notice on display highlighted that it was not known when it will re-open. 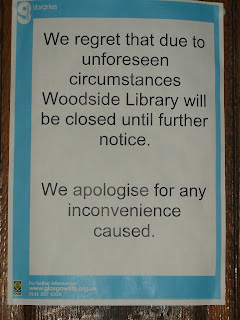 I have made enquiries with staff at Glasgow Life about reason for the library closure and I understand ceiling repairs are needed. It is anticipated that funds will have to be identified to cover the cost of any works. I will support efforts to ensure the library is re-opened as soon as possible.

For updates, please go to Glasgow Life at: http://www.glasgowlife.org.uk/libraries/your-local-library/woodside-library/pages/home.aspx

Please note the library is re-opening on Wednesday13th January 2016.
Posted by ScottishGreenParty at 12:52 No comments:

As you may be aware, Stamps can be saved and recycled for the benefit of good causes. Yesterday, I finally collated the stamps that I have removed from envelopes over past year for the RSPB Save the Albatross Fund. 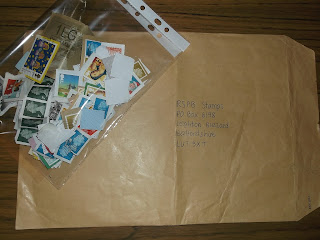 Please note that the RSPB is part of a global campaign by BirdLife International to Save the Albatross which highlights;

"Fifteen out of 22 species of albatross are threatened with extinction. The main threat to albatrosses is death at the end of a hook on a fishing long-line.

Working closely with BirdLife International partners in the Southern Ocean, we're working to stop the needless slaughter of these amazing birds and bring them back from the brink of extinction."
Further information about this appeal for recycled stamps is available at:
http://www.rspb.org.uk/joinandhelp/donations/campaigns/albatross/howyoucanhelp/stamps.aspx
Posted by ScottishGreenParty at 12:38 No comments: