This month, a campaign was launched to raise awareness of stalking behaviour and where to go for help.

It is hoped that this will be the first in a series of films that highlight the issue and keep the issue of stalking in the public eye.

A gift too far - http://www.youtube.com/watch?v=879X9hTnNzs&feature=youtu.be

I'll take care of you - http://www.youtube.com/watch?v=MuDeUCCTN3U&feature=youtu.be

Action Scotland Against Stalking - http://www.scotlandagainststalking.com/
Posted by ScottishGreenParty at 15:27 No comments:

Today, I have given support to the demand for the justice for the victims of the Bangladesh building collapse. There are reports of over 300 people being killed in the collapse of a building which housed garment factories making clothes for Primark, Matalan, Mango and other major brands.

It is essential that these UK high street clothing companies respond to this tragic loss of life by garment workers based in Bangladesh. They have to accept responsibility for this tragedy by paying full compensation to the workers and commit to action to ensure disasters like this become a thing of the past.

Petition by President of the National Garment Workers Federation, Bangladesh -
http://www.change.org/en-GB/petitions/primarkjobs-mango-matalan-ensure-safety-for-workers-compensate-victims-of-building-collapse
Posted by ScottishGreenParty at 11:10 No comments:

Carers claim there is 'institutionalised discrimination' against their children

On 15th April 2013, I attended the launch of the Scottish Kinship Carers Alliance in Glasgow's City Chamber. It was a very informative event with the findings of a groundbreaking study on informal kinship care presented by Buttle UK.  The launch hosted by the Lord Provost of Glasgow - Sadie Doherty - was attended by a range of politicians and policy makers.

Scottish Kinship Carers, the majority of whom are grandparents, have established a national Alliance to address what they believe is the 'institutionalised discrimination' from Local Authorities and the Scottish Government against the children in their care.

Speaking at the event, the Chair of the Alliance and Kinship Carer from Dumbarton, Anne Swartz stated: “We are sick of seeing the children in our care suffer without the basic support from Local Authorities. Kinship children are routinely written off and discriminated against while foster placements have access to a wide range of support and services. Enough is enough. We have come together to put a stop to this institutionalised discrimination and fight for the rights of our children.”

As part of the proceedings, the Buttle UK, outlined the findings of their report called "The Poor Relations? Children and Informal Kinship Carers Speak Out". This is a detailed study on the impact of informal kinship care arrangements and the massive challenges that the carers group faces.

Anne Marie Peffer, Buttle's Scotland manager, expressed her support for the Scottish Kinship Care Alliance and she said: “This report puts a spotlight on the huge personal cost faced by relatives who are bringing up a child. Kinship Carers keep children out of the care system and with family where they have stability and continuity., The children are thriving but we have been taken aback by the poor health they suffer and the severity of the financial hardship they are enduring. While scrimping and saving, unable to provide even basic items, they are saving the Scottish Government millions in care costs each year. We hope this report will help them get the recognition and support they deserve”

The Buttle UK's report is recommending that a UK wide financial allowance for all Kinship Carers is introduced, that statutory services no longer turning away informal carers looking for support, and that policy and practice relating to kinship care are improved significantly.

Scotland's Kinship Carers were encouraged to develop a national network after contact with a vocal Kinship Carer and campaigner from Northern Ireland. Kinship Care Northern Ireland will work closely with the Scottish Alliance. The Scottish Kinship Care Alliance's  launch has been timed to coincide with negotiations on the new Children and Young People's Bill. Members of the Alliance want to ensure that they are included and heard in the Bill formulation process to make it as effective as possible for their children.

Exhibition of works by artists with ASD

There is an exhibition of works by artists with autistic spectrum disorder at Trongate 103 until 30th April 2013. I made a visit today to view this showcase of paintings, ceramics, drawings, textiles, video and block printing by 41 artists. This was developed with support from Project Ability who provided two ten-week workshops for the people involved.


The exhibition offers a variety of interesting work and highlights the wide range of talents and interests of the artists. Involvement in creative activities can help people with ASD to express their ideas and share their aspirations with the wider public.

It is recognised by the National Autistic Society that about 1 in 100 people has ASD. This affects how a person communicates and relates to other people. Someone with ASD can experience difficulties which require specialist support and advice from services such as the Autism Resource Centre.

Posted by ScottishGreenParty at 13:12 No comments: 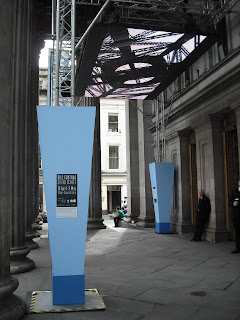 View of the crane outside the entrance to GOMA.

There is an online site seeking memories, stories and pictures about Finnieston Crane until 3rd May 2013.

Today, I attended an event at the Kibble Palace, Glasgow Botanic Gardens which encouraged children and adults to take up making arts and crafts. There were free craft work shops with an opportunity to learn how to make Pompom flowers, Fabric Birds and Fabric Fish. Everyone who got involved appeared to have a lot of fun and gained new skills or confidence from the experience. 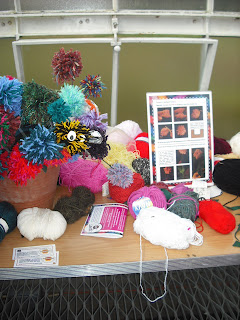 Pompom Flowers and the wool used to make them. 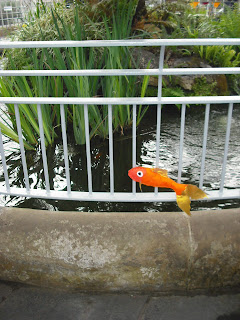 The next Craft Bomb event supported by Voluntary Arts Scotland will take place on 11th May 2013 and the details are provided on the poster below or via their website. 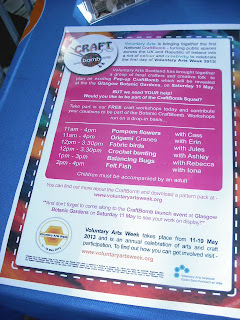 There was a national demonstration against Nuclear Weapons on Saturday 13th April in Glasgow. I joined thousands of trade unions, faith and community groups and people from all walks of life in George Square to oppose these horrendous weapons of mass destruction. 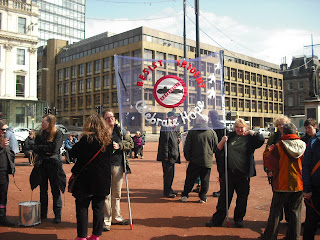 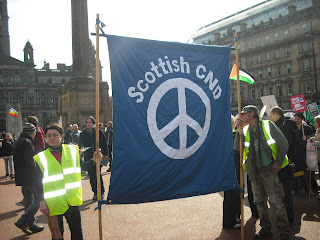 
A broad based coalition came together to call for the scrapping of Trident Nuclear Weapons System and funding for human needs. The UK Government is planning to spend £100 billion to replace Trident while funding for health, education, pensions, and disability benefits is being cut.  £5 billion has already been spent designing the new weapons.
We can stop nuclear weapons being based on the Clyde and lead the way to a nuclear free world.


Posted by ScottishGreenParty at 14:33 No comments:

Over this weekend, conversations have included discussion about the poor state of the roads and pavements across Glasgow. It would seem that improvements have been made but car drivers are still facing ongoing problems with burst tyres caused by uneven road surfaces. 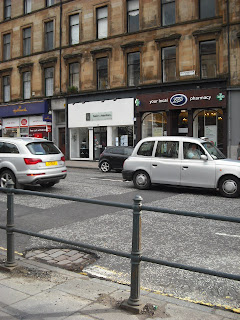 I am constantly reporting potholes, pavement cracks and woren road markings to the staff at Land and Environmental Services.

As a result of various requests, the following refurbishment works have also been added to the programme or have been completed in the Hillhead area:- 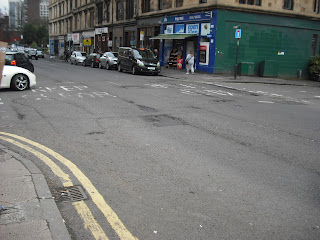 Further streets can be put forward for repairs and resurfacing as part of the Roads Investment Strategy.

Posted by ScottishGreenParty at 14:22 No comments:

Yesterday, I attended an inspirational conference organised by the Scottish Women's Convention. This provided a forum for discussion about the key findings of a survey in to older women and employment completed in March 2013.

The most significant barriers for older women entering, sustaining and progressing in employment are identified as:-
There were several speakers at the conference including Miriam O'Reilly, Carol Fox and Sheila Kettles. The experience of older women in the media was highlighted with reference to Miriam O'Reilly's employment tribunal against the BBC. Following the winning of the case, Miriam set up the Women's Equality Network to offer advice and guidance for women faced with discrimination in the workplace. 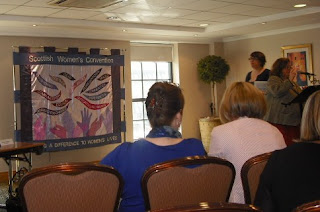 The suggested support needed for older women detailed in the survey include:-
Older women need resources and encouragement from employers, trade unions, government and wider society to be able to overcome the barriers they face in the workplace.

Women of worth - www.wow-a2z.com
Posted by ScottishGreenParty at 12:47 No comments:

Yesterday, there was unanimous support from Councillors at the Full Council Meeting for the motion in support of Record Store Day which takes place on 20th April. The motion was put forward by Cllr Liam Hainey, one of the new Green Councillors elected to Glasgow City Council.


The motion states, "On the 20th of April, places around the world will celebrate Independent Record Store Day. Council recognises and applauds the contribution that independent record shops throughout the city have made to the music scene for which Glasgow is world renowned and celebrated, as recognised by our status as a UNESCO city of music.Council further recognises the significant benefits more generally that small local business bring to the culture and economy of Glasgow. Council therefore instructs the Glasgow City  Marketing Bureau to publicise this event in order to support the city's independent record stores and their valuable addition to our city."

Today, I spotted a poster for a special event to celebrate Record Store Day at Oxfam Music in Byres Road. 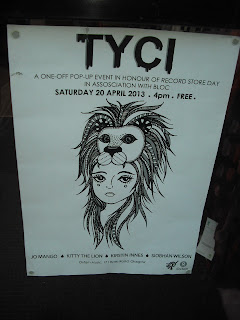 On Saturday, 30th March, I attended the demonstration against the Axe the Bedroom Tax. This brought together various groups and tenants who are campaigning to stop evictions and put pressure on the UK Coalition Government to axe the bedroom tax. 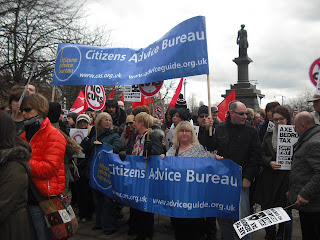 CAB representatives in the demo. 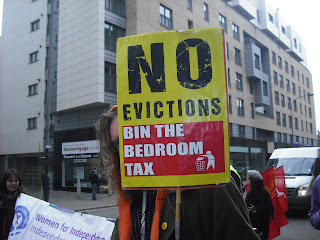 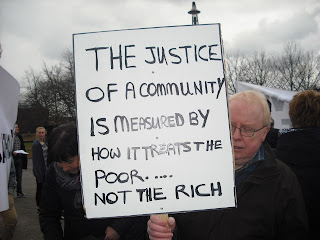 There were a variety on placards on the demonstration

The bedroom tax will affect over 100,000 households across Scotland from 1st April as a consequence of the welfare reform.

Posted by ScottishGreenParty at 15:41 No comments:

The demonstration in support of North Kelvin Meadow took place at George Square and highlighted the efforts of the community to make the city more sustainable. 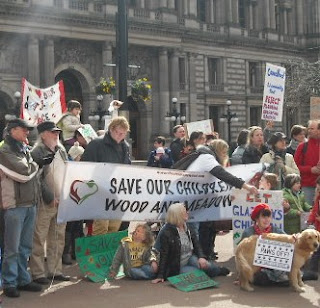 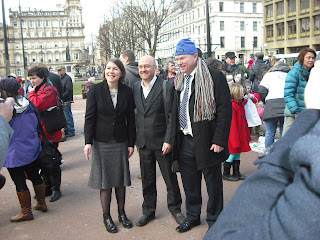 Patrick Harvie MSP, Douglas Peacock and myself at George Square.

Local residents have put in the hard work to transform land that the Council let fall into disrepair, and a wealth of community activity has sprung up around North Kelvin Meadow as a result. If the Council lets this development go ahead, it will be utterly disheartening for local residents, and send a pretty negative message to other people in Glasgow who are considering investing time and effort in improving their local area.
Posted by ScottishGreenParty at 15:27 No comments: