Over the weekend, I travelled by ferry between Ardrossan and Brodick to enjoy a holiday in Arran. I appreciated the opportunity to travel on a ferry service operated within the public sector by CalMac Ferries Limited. This service safeguards workers rights including protection of the workers’ pension scheme and a policy of no compulsory redundancies. 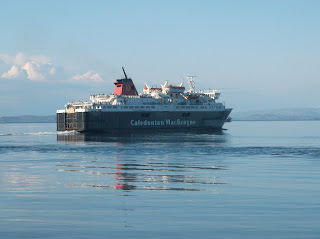 Currently, there is construction work underway to create new facilities for ferry passengers at Brodick Harbour. There will be a need to ensure such investment by CalMac Ferries Limited delivers improvements for the travelling public and the workforce. Rural and island communities are reliant on these ferry services to sustain their economies.

Posted by ScottishGreenParty at 15:23 No comments:

There is work underway to refurbish the road markings within the Hillhead Restricted Parking Zone. In the next few weeks, some areas will require temporary parking restrictions with provision of "No Waiting" cones in several streets. Residents will be notified of temporary arrangements by notices on lamp posts and close entrances. The streets to be refurbished include Bank Street, Otago Street and Cecil Street. 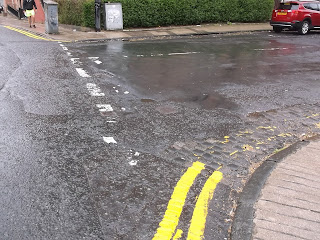 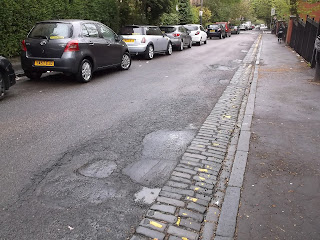 Residents within Hillhead are asked to make alternative arrangements for parking on the dates when works are carried out in their street.
Posted by ScottishGreenParty at 14:35 No comments:

With the support of Woodlands Community Development Trust, it has been possible to plan regular community clean ups to clear bulk items and litter within the back lanes and backcourts of Woodlands. 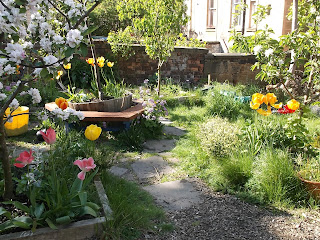 On Sunday, I helped with the clean up and gathered with residents to enjoy a social gathering afterwards in Woodlands Community Garden. 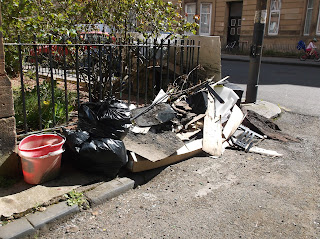 Bulk items cleared from a back lane.

The items collected during the clean up were uplifted by Land and Environmental Services. Volunteer clean ups are also supported by Community Safety Glasgow. The efforts of local residents have helped to transform the back lanes and ensure council vehicles can make use of these lanes to access bins for the uplift of refuse and recycling materials.

Further details about Woodlands Community Development Trust at:
http://www.woodlandscommunitygarden.org.uk/
Posted by ScottishGreenParty at 16:19 No comments:

Recently, I attended a meeting to discuss the impact of budget cuts on women and the opportunities to develop gender budgeting.

Currently, the UK Government does not complete a detailed equality impact assessment as part of the budget process. However, the UK Women's Budget Group has completed an analysis and produced a comprehensive gender assessment of the 2016 UK Budget, which is available at:
http://wbg.org.uk/wbg-publishes-comprehensive-gender-assessment-of-the-2016-budget-women-paying-for-the-chancellors-tax-cuts/

Since the establishment of the Scottish Parliament, there has been progress towards gender responsive budgeting and the Scottish Women’s Budget Group is recognised as taking forward this agenda. There is a Equality and Budgets Advisory Group and Equality Budget Statement produced for the Scottish Budget.

Reference can be made to the Fair Work Framework published in March and this shares good practice to support workers and businesses to address inequalities. Further details are provided at: http://www.fairworkconvention.scot/index.html

There is a wide range of research in to gender pay gap and the challenges that women face such as changes to pensions, in-work poverty, self-employment, childcare and age discrimination. Case studies are vital to highlight the impact of budget decisions on women by UK Government, the Scottish Government and Local Authorities.

The work of the Scottish Women's Budget Group continues to develop with focus on linking with economic strategies and national performance frameworks.

Information on the Scottish Women's Budget Group available at: http://www.swbg.org.uk/
Posted by ScottishGreenParty at 15:44 No comments:

Whilst I was jogging around the Woodside area, today, I noticed new grey food waste recycling bins in several backcourts. 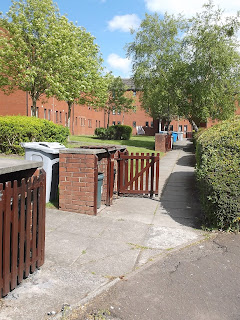 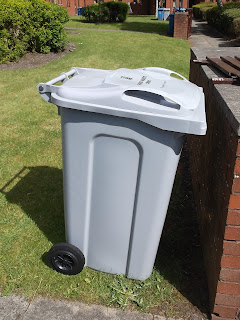 There is a roll out of a food waste recycling service across households in Glasgow in the next year. This is a welcome investment to help residents to reduce waste going to landfill.

Posted by ScottishGreenParty at 15:43 No comments:

On Friday, I attended a tour of sites within the White Cart Flood Prevention Scheme. It was very informative and highlighted the huge benefits of investment to manage the river catchment of the Auldhouse Burn and White Cart River. I visited one of the three flood storage areas upstream of Glasgow, which temporarily holds back the flood water arising from extreme rainfall. The storage facilities are able to control the release of water passing downstream through Glasgow. 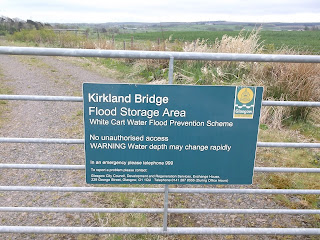 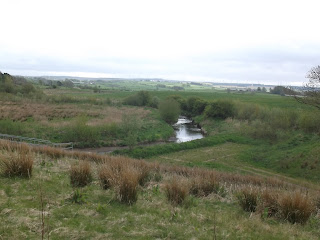 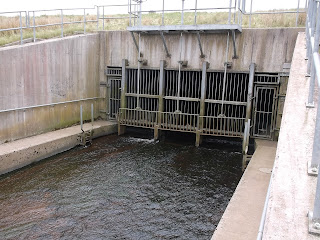 View of a storage area on the outskirts of Glasgow.

There is still a possibility of flooding within Glasgow, and there are flood defences created by low walls and embankments along the banks of the White Cart River. I was shown the flood defences within Spean Street, Langside. 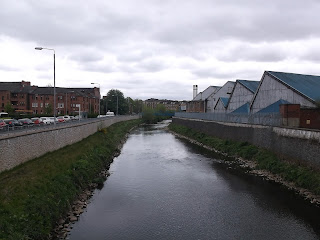 View of walls along the river at Spean Street.

The current scheme has been operational since September 2011. A further phase of flood defences is planned within the southside of Glasgow in 2017.

Posted by ScottishGreenParty at 15:27 No comments:

Today, I attended the May Day March in Glasgow. There was a stall handing out information about the campaign asking for Strathclyde Pension Fund to divest from fossil fuels. This campaign builds on the efforts of students to secure divestment from fossil fuels by Glasgow University and has been gathering momentum over the last 6 months. 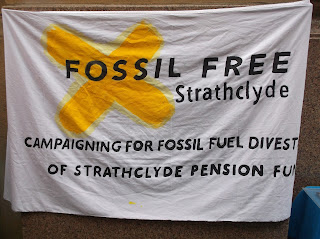 Banner on display at entrance to the May Day Rally. 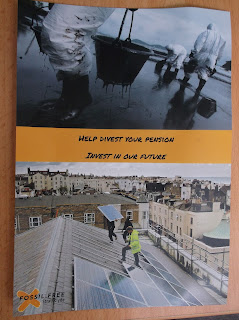 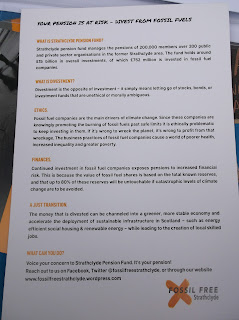 Leaflet with information about the campaign.

Fossil Free Strathclyde is calling on Strathclyde Pension Funds (SPF) to divest all current holdings in fossil fuel companies. By taking this action, SPF would show their social and environmental responsibility, and help to secure a stable and better future for its members, Scotland, and the international community.

Further Information is available from Fossil Free Strathclyde's campaign at:
https://fossilfreestrathclyde.wordpress.com/2016/02/15/fossil-free-future-to-strathclyde-pension-fund/
Posted by ScottishGreenParty at 16:41 No comments: