This evening, I heard that the swimming pool at North Woodside Leisure Centre (known as Glasgow Club North Woodside) on Moncrieff Street is reopening this weekend. 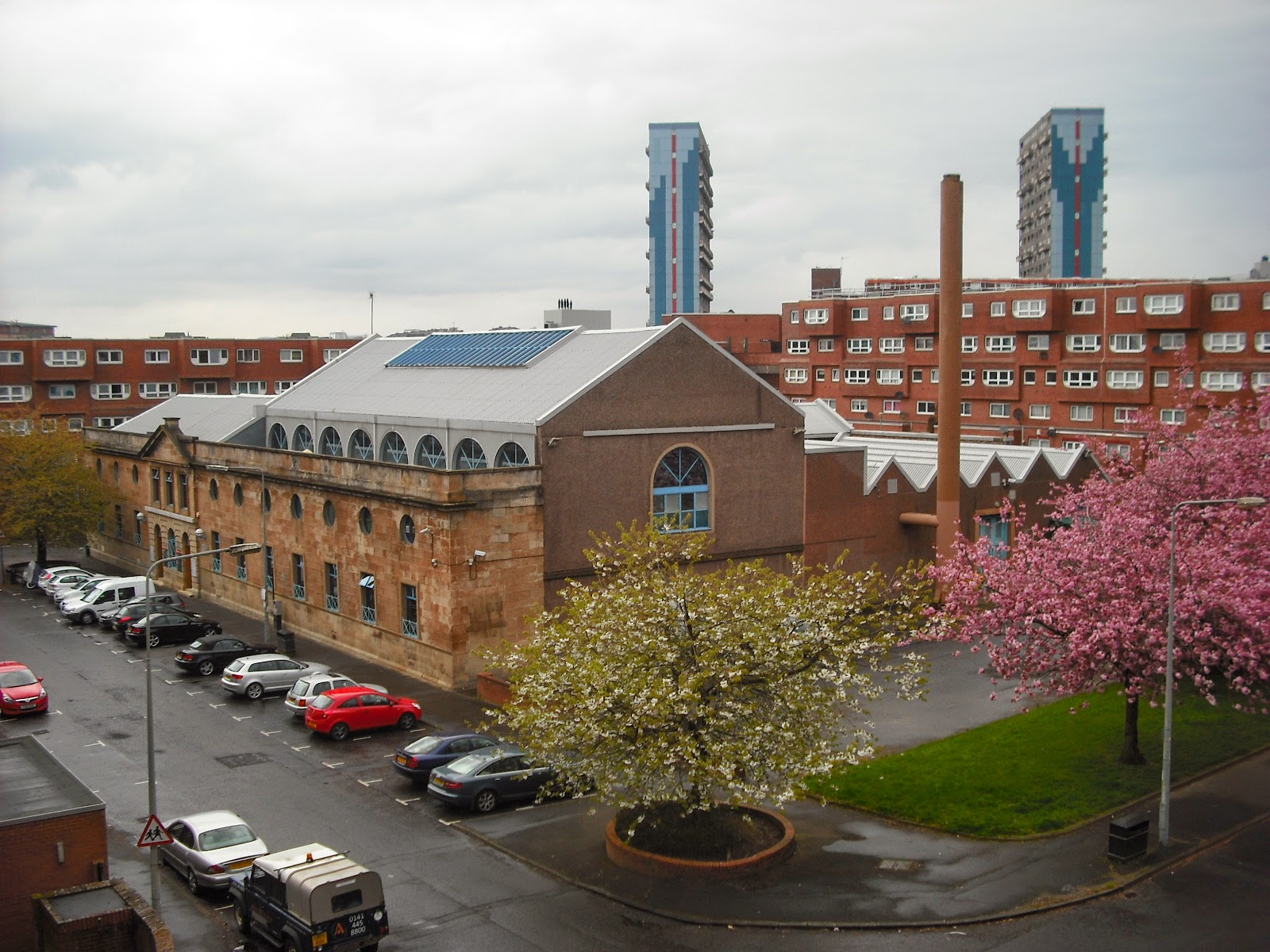 I am hoping to have a swim soon. Please watch out for further information on the website for Glasgow Club North Woodside.

Useful link: Glasgow Life at: http://www.glasgowlife.org.uk/sport/glasgow-club/north-woodside/Pages/home.aspx
Posted by ScottishGreenParty at 13:38 No comments:

Finding out about a better way to work

Today, I received further information about the work of the Bike Station and picked up a leaflet about their initiative "A better way to work" which encourages businesses and groups to support cycling, walking and public transport. The leaflet gives details of a variety of services available to residents which supports their use of bikes and public transport options. I was impressed to hear that there is special offer of free membership of the City Car Club for one year. Bikes can be accessed on a loan basis for two weeks to help people to try out cycling.

More details are available from: http://www.thebikestation.org.uk/
Posted by ScottishGreenParty at 12:35 No comments:

Today, I attended the launch of the Cook, Grow and Sew Project funded by Keep Scotland Beautiful - Climate Challenge Fund. The project is giving support to minority ethnic communities to engage in activities that will reduce carbon emissions and developing the health and well-being of people involved. 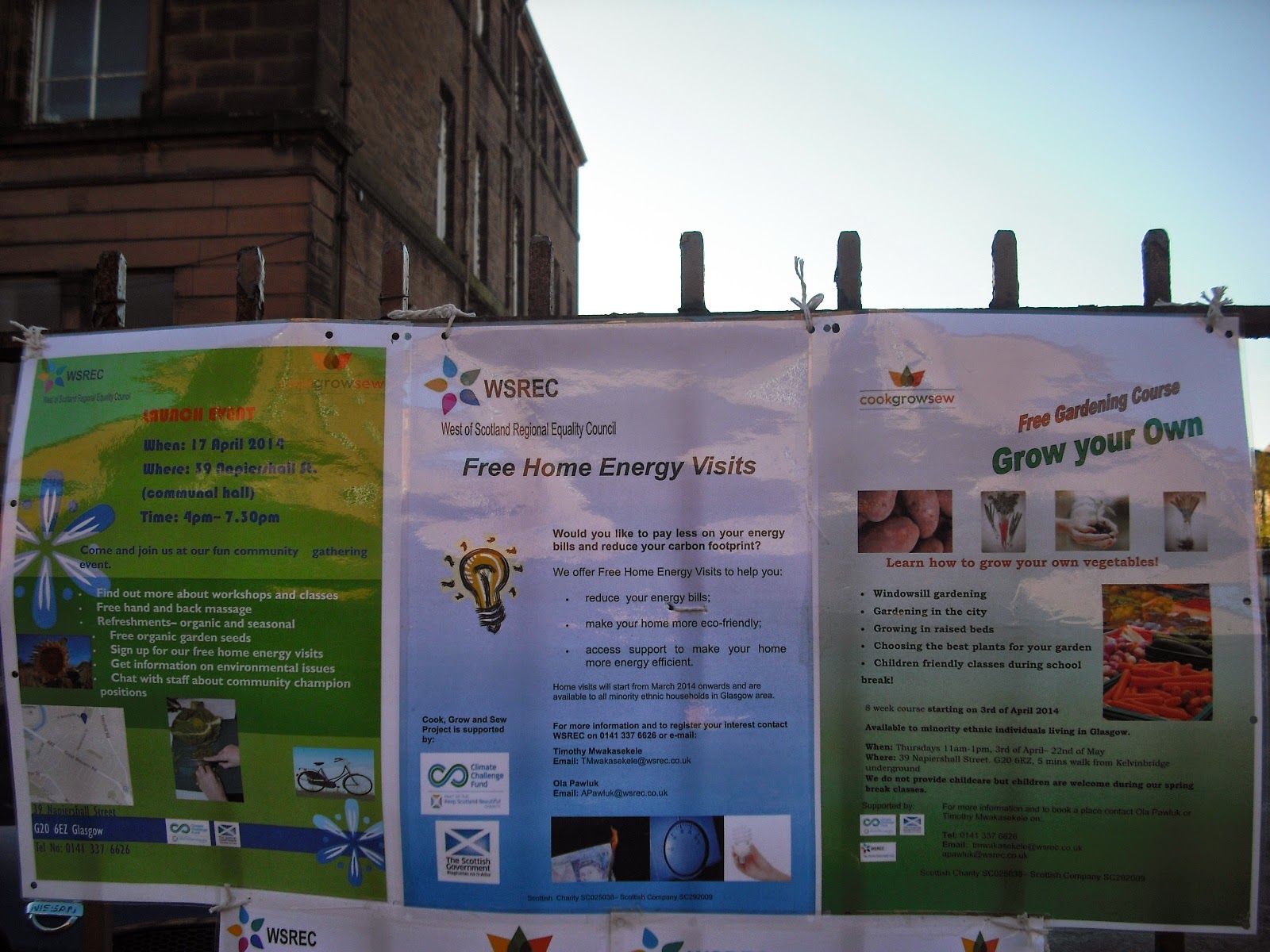 Publicity for the launch event held at the Napiershall Street Centre

The project is seeking to raise awareness and increase the knowledge of communities about climate change and reducing carbon emissions. It will engage with individuals from minority ethnic communities (focusing on Polish, Middle Eastern and African communities) in Glasgow. 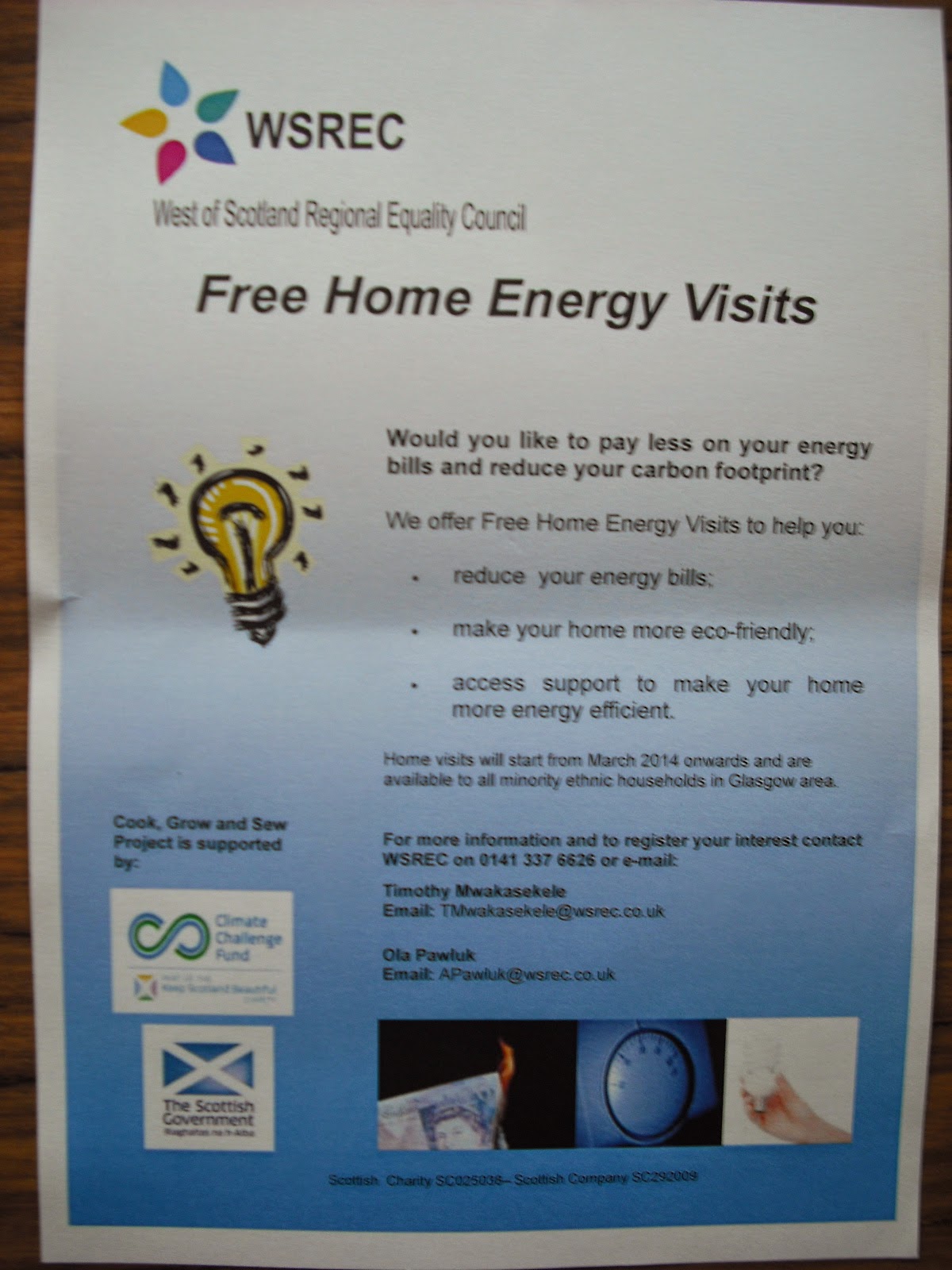 There are a range of activities taking place including free home energy visits to support energy efficiency. Also, workshops are offered in grow your own, sewing and repairing, cookery, and cycling.

Posted by ScottishGreenParty at 12:21 No comments:

Over the last month, improvement works have been underway to Ashton Lane and Cresswell Lane. The contractor have been lifting and relaying the cobbles within the central section of the lane. This is an enhancement to the heritage and character of this unique area of Glasgow. 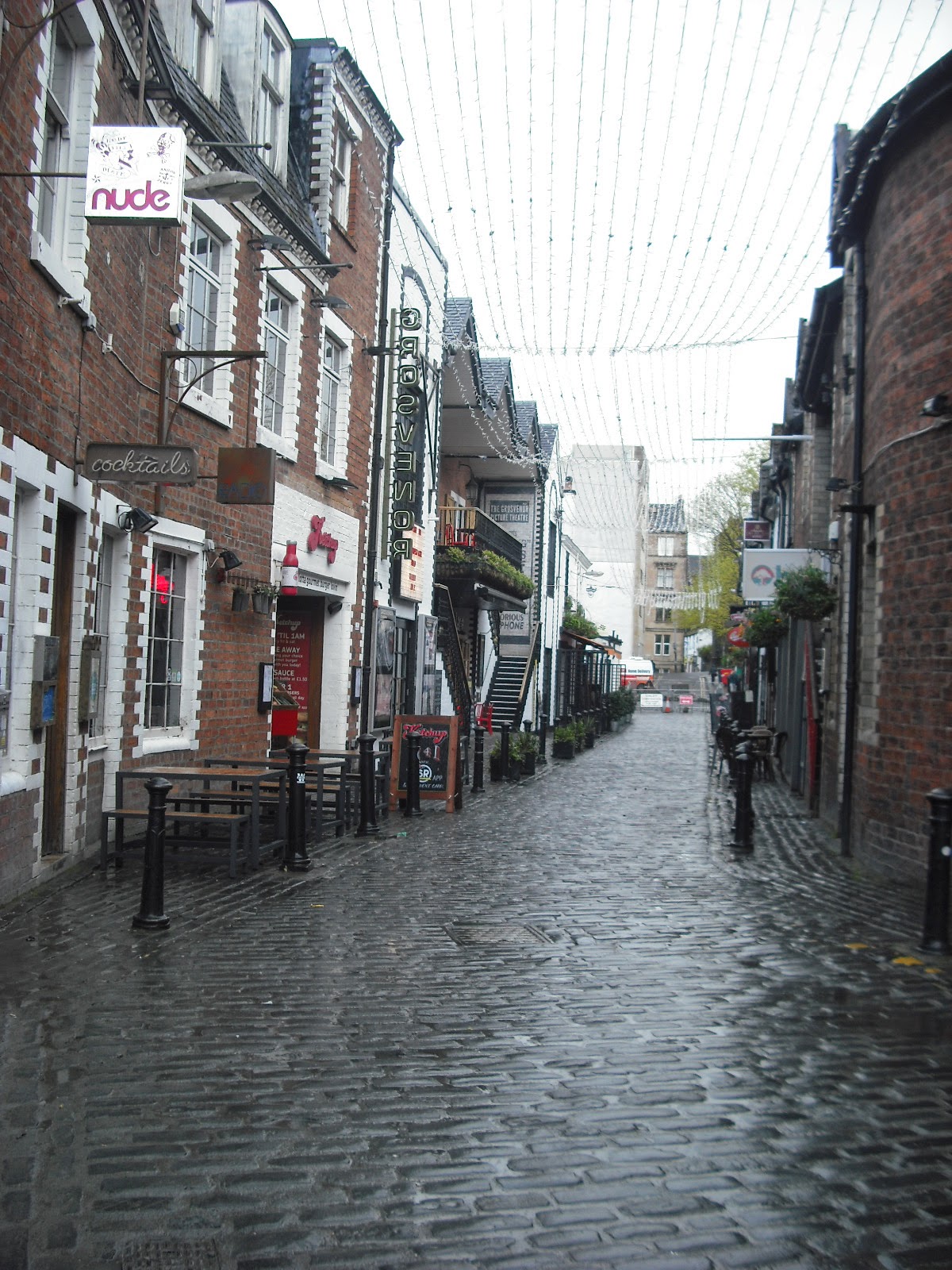 Improvement to cobbles in Ashton Lane. 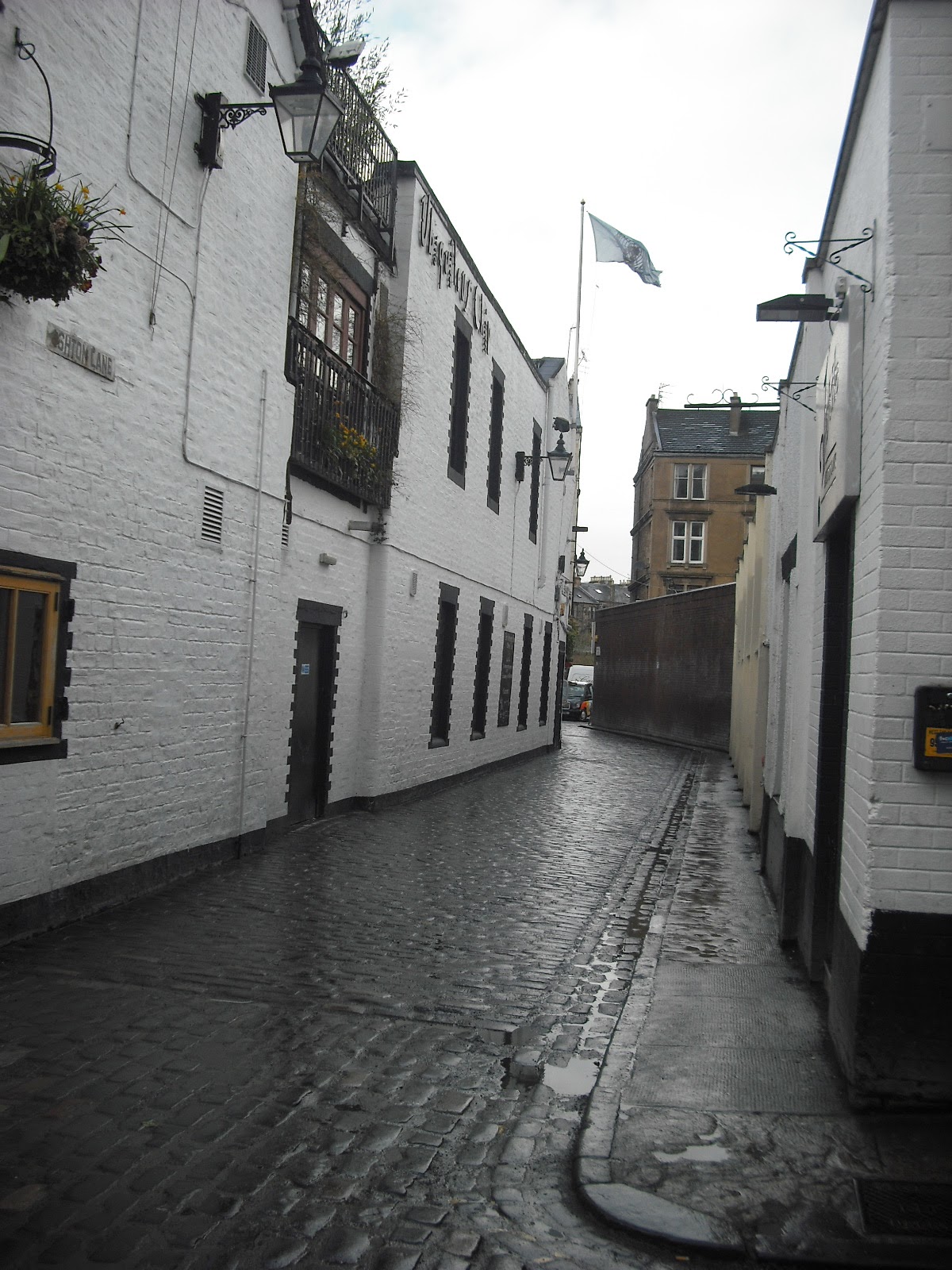 The next phase of work continues with improvements to the cobbles within Cresswell Lane. During the works, pedestrian access is maintained at all times. This contract is funded by Glasgow City Council.

Posted by ScottishGreenParty at 14:45 No comments:

In the last week, there has been extensive coverage on the problem of air pollution in Glasgow. This seems to have been prompted by the reporting of 300 deaths annually linked to poor air quality.

Byres Road is an air quality management zone due to the hazardous level of air pollution and there is a requirement for such zones to have their air quality monitored. Unfortunately, the monitor for PM10 particles has been broken for the last seven months.

So far, a replacement monitor has not been forthcoming. Residents are very concerned about the lack of monitoring and therefore, the lack of information available about any daily levels of air pollution putting health at risk. Hopefully, this situation will be resolved in the next few weeks. 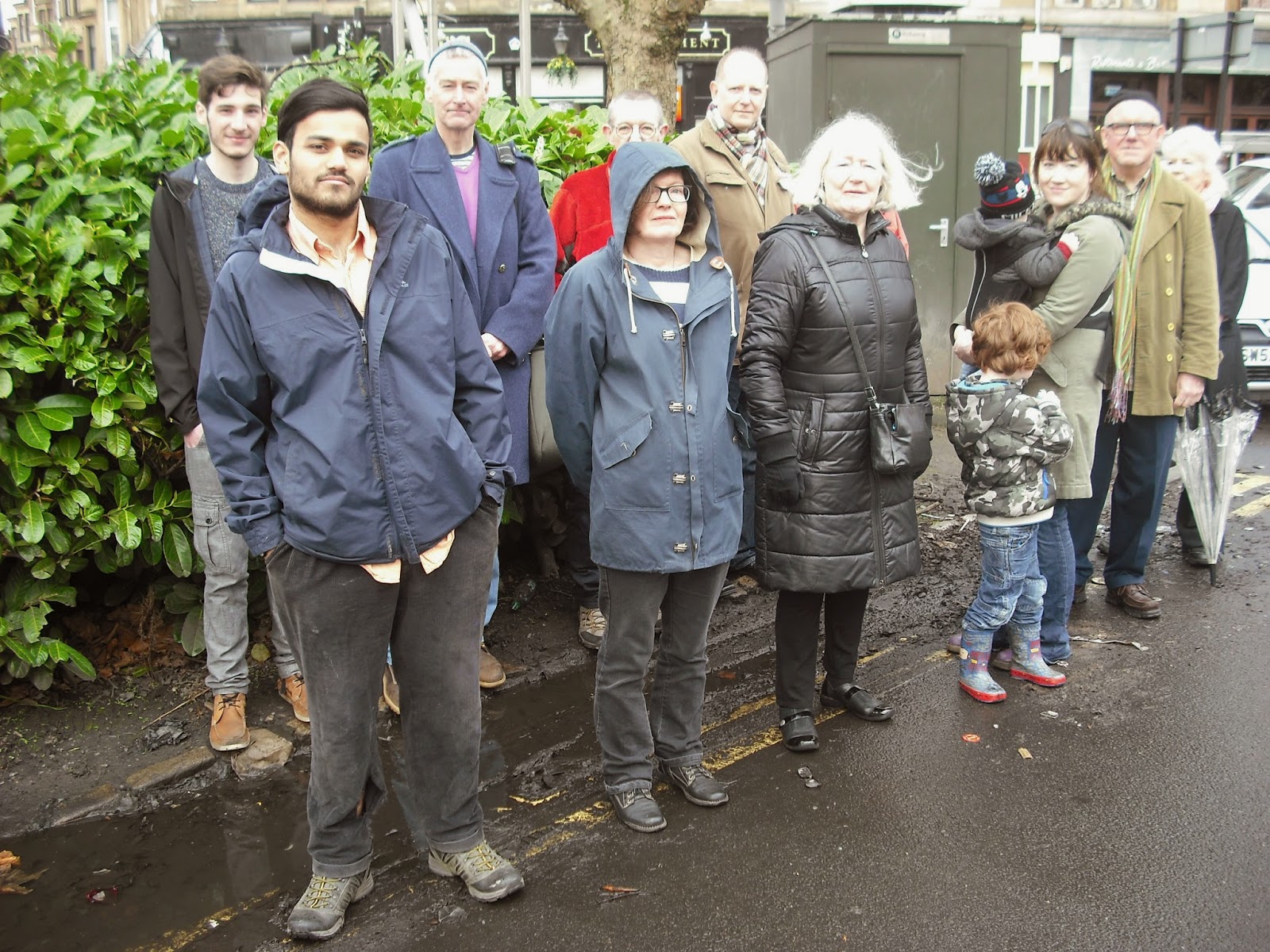 Residents at the location for the monitor.

Various solutions are needed to reduce air pollution. Glasgow City Council has an air quality action plan which details activities taking place. More needs to be done to cut back road traffic and promote cycling or walking or public transport as an alternative to transport by car.

At the moment, a City Centre Transport Strategy is out for consultation and actions to tackle air pollution concerns can be highlighted in responses.

Update on 19th May 2014: A new unit was installed on Friday 9th May. The equipment which monitors the particulate pollution was turned on, on Tuesday 13th May 2014.

Consultation on City Centre Transport Strategy until 31st May 2014-
http://www.glasgow.gov.uk/consultations
Posted by ScottishGreenParty at 14:35 No comments:

It is possible to take the view that there is a greater and more urgent threat to the climate than even global warming. This is the threat posed by nuclear weapons. A large-scale nuclear war would lead to a sudden change in climate, called a nuclear winter, which could threaten all life on the planet.
In the last decade, climate scientists have used advanced climate modelling to show that even a small exchange of nuclear weapons, between 50 and 100 Hiroshima-sized bombs, would produce enough soot and smoke to block out sunlight, cool the planet, and produce climate change unprecedented in recorded human history. There is research by the National Centre for Atmospheric Research (NCAR) which suggests that a “limited” nuclear war would also burn a hole through the ozone layer, allowing extreme levels of ultraviolet radiation to reach the Earth’s surface, which would greatly damage agriculture and most likely lead to a global nuclear famine.
There is an international campaign focused on the universal humanitarian imperative to abolish nuclear weapons due to their catastrophic humanitarian and environmental impact.The Second International Conference, attended by 140 Governments from regions across the world, concluded on 15th February 2014 with the call for a diplomatic process to ban nuclear weapons.

This is a decisive move which gives support to the development of new international standards on nuclear weapons, which are legally binding. This process will be taken forward in Vienna later this year. The UK Government did not participate in this conference and currently it is proposing to continue to base nuclear weapons on the Clyde. However, it is increasingly difficult for UK Government ministers and military leaders to justify the manufacturing, testing and modernising of nuclear weapons in huge numbers as international negotiations to ban them take shape.

There are over 200 nuclear bombs in Scotland. The majority are on board Trident submarines which operate from Faslane and some are stored at Coulport, about 30 miles from Glasgow.

There is a plan for a new fleet of nuclear-armed submarines that would come in to service in 2028, with a new design of nuclear bomb operational in the 2030s and a new missile in place by 2040. There is an expectation that there will be a base in Scotland for a new nuclear weapons system until 2067. This is estimated to cost about £100 billion over the duration of the 50 year programme.

What would happen to these plans for Trident nuclear submarines if Scotland were to become Independent? Scottish Independence would make a difference. A sovereign Scottish government will have the right to insist that nuclear weapons must be removed from Scotland as swiftly as possible.

Greens are calling for the written constitution of a newly independent Scotland to include a ban on nuclear weapons. Because we believe there is no viable alternative site for Trident nuclear submarines in other parts of the UK, Scottish Independence could result in there being no nuclear weapons in Britain.

By reaching agreement on the removal of nuclear weapons and stopping Trident Replacement, Scotland's Independence could help promote the Treaty on the Non-Proliferation of Nuclear Weapons, and further the goal of achieving a ban on nuclear weapons. By voting Yes and supporting Scottish Independence, we can help to secure a more sustainable, peaceful world. 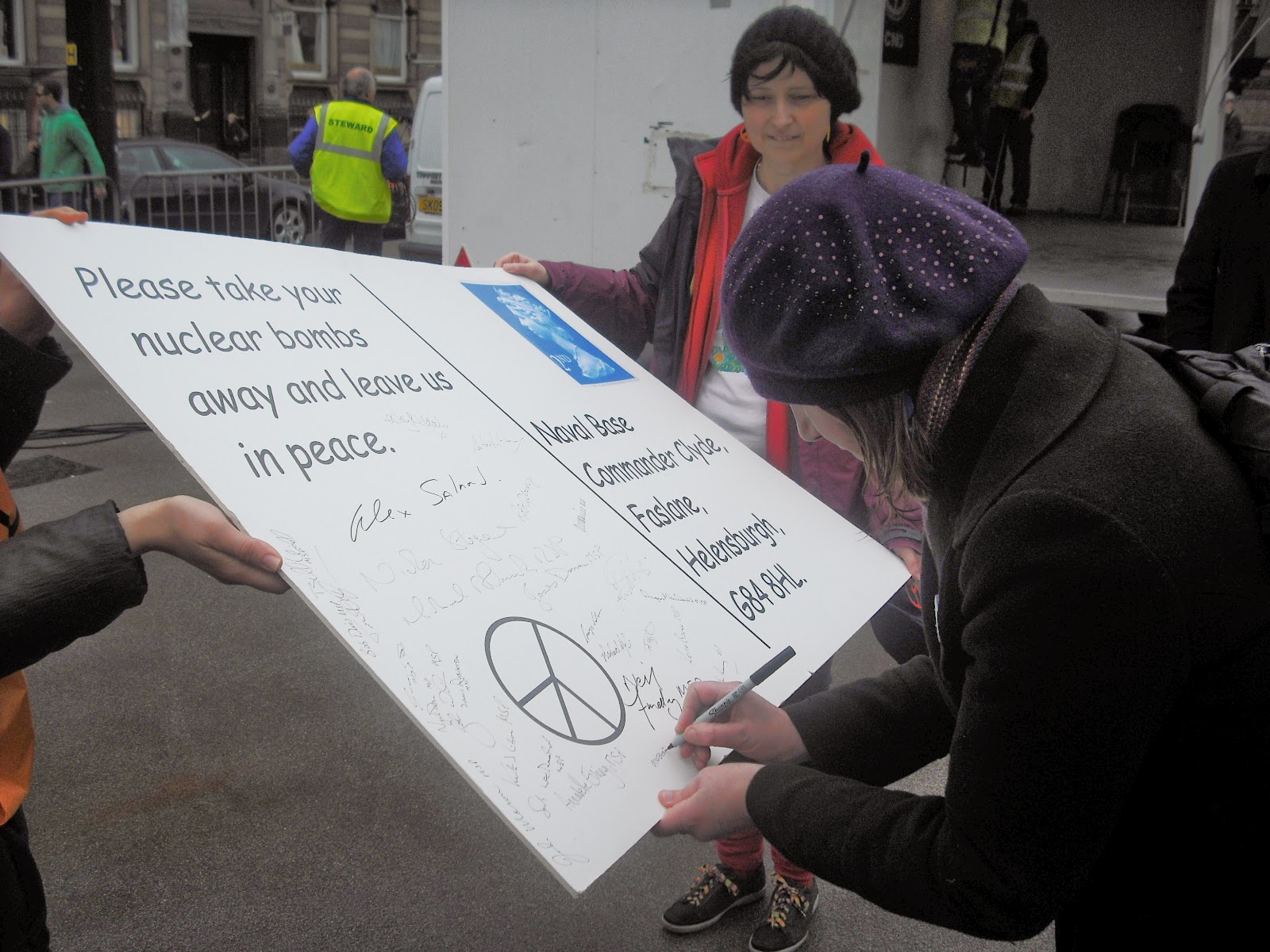 This Thursday, there will be a debate on blue bin recycling at the Full Council Meeting, in the City Chambers.  It will be an online webcast of the meeting for the first time. The motion to be discussed states;

"Council acknowledges that based on 2012 statistics, only 29.51% of Glasgow's waste is recycled, composted, or prepared for reuse and Glasgow is the fourth worst local authority for recycling in Scotland.

The motion has been developed in response to the ongoing concerns of constituents about blue bin recycling service.

Yesterday, I went for a stroll through Kelvingrove Park to observe the various works taking place in the run up the Commonwealth Games.

Currently, there is a planned removal of trees surrounding the Lord Roberts Statue supported by a Felling Licence approval from Forestry Commission Scotland. This has taken place with assistance from both Historic Scotland and the Historic Garden Society. 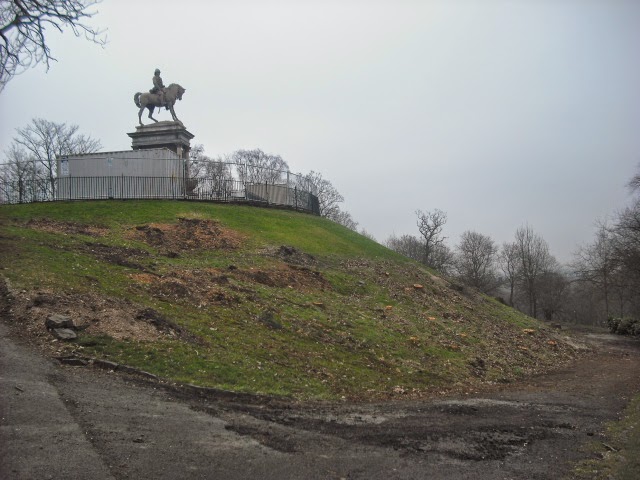 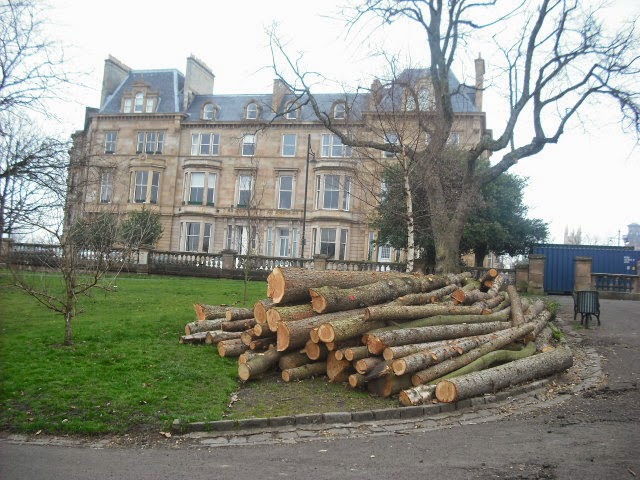 The tree trunks piled up.

The justification for this work is that "the reinstatement of the designed open space is a key component of the refurbishment of the Lord Roberts Memorial."

It is not clear to me that this work is absolutely necessary. In the coming year, as part of sustainable management of the city's trees, I would expect tree planting is completed to replace the number of trees felled. Your views and comments on the tree removal would be welcomed.
Posted by ScottishGreenParty at 14:11 No comments: