We should expect fashion's next rising stars to come out of Scotland.

Known as Scotland’s Fashion Oscars, these awards are making an important contribution to the aim of placing Scottish fashion talent on the global map.

They were founded to provide a platform for Scottish creative talents, by fashion publicist Tessa Hartmann. Since 2006 they have honoured and celebrated the best of Scottish fashion, and top Scottish designers, fashion photographers, models, stylists and make-up artists. Design talents of those such as Christopher Kane, Jonathan Saunders and Holly Fulton are establishing our fashion future.

For the first 4 years, this internationally acclaimed event was held in the majestic Stirling Castle. In 2010 and more recently, the event moved to Glasgow, taking place at the Science Centre and Armadillo.

This year, the awards ceremony is taking place in London. I was shocked to read this news in the Sunday Herald and consequently, I have submitted a motion for debate at Glasgow City Council on 27th June 2013.

"Council notes that the 2013 Scottish Fashion Awards will take place outwith Scotland for the first time in its history, at Dover House, in London on Wednesday 9th October 2013. It has been held in Stirling and Glasgow over the last 7 years.

Council regrets that there was a failure to reach agreement on the hosting of these Scottish awards in Scotland. Council requests that a civic reception be held to acknowledge the success of these talented Scots and, further acknowledges our continuing support for the fashion industry by making every effort to enable the Awards ceremony to take place in Glasgow next year."


Please support the motion and help bring the Scottish Fashion Awards back to Glasgow in 2014!
Posted by ScottishGreenParty at 15:40 No comments:

During the month of June, I have been inspired by the clean up of a lane between Woodlands Drive and Dunearn Street. This has involved a partnership between the Council's Cleansing staff and residents overlooking the lane.

Through dedication and hard work, tonnes of mud built up over 40 years were removed from the lane. Now, it is possible to enjoy the sight of cobbles and a litter free environment. 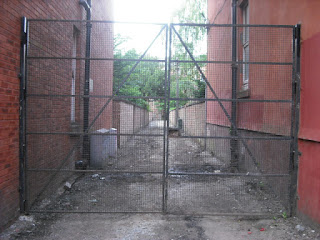 This lane has been transformed by a momentous effort leading to new friendships and increased socialising amongst neighbours.

Various residents across two other lanes have been involved in similar improvements. More work to clean up the lanes is planned and I would be glad to hear from any residents who want help to clean up their lane.

Posted by ScottishGreenParty at 15:57 No comments:

Yesterday, on Monday 24th June, there was a local public event held to provide information on parking, road safety, cycling and the City Car Club for residents in the Dowanhill area.

Residents were able to share their concerns and ask questions of various council officials. Also, I gathered comments on traffic and road safety from some of those who attended and these views will form the basis of a report back to council officials by 8th July 2013. 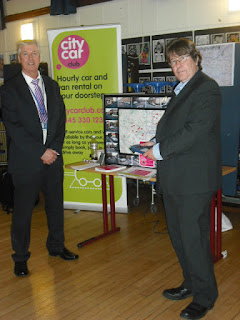 The staff involved in the promotion and management of the City Car Club were available to answer any questions. They received positive responses from residents, many of whom were not aware of the local car club spaces nearby.


Posted by ScottishGreenParty at 15:47 No comments:

As part of Big Lunch celebrations, I went along to Millennium Park in Woodlands today. Crowds gathered to share food and socialise in one of the few greenspaces within the area. 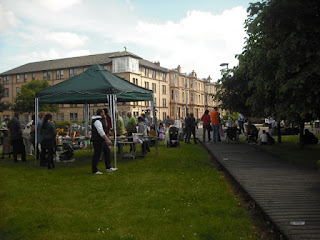 View of the Millennium Park.

It was beautiful sunny day which encouraged all sections of the community to meet up. Everyone got the opportunity to enjoy the outdoors, share local news and have a chat with other residents. The success of the event was not possible without contributions from local voluntary groups including Flourish House, Woodlands Community Development Trust and the Albany Centre.

Posted by ScottishGreenParty at 16:31 No comments:

Today, I attended the public meeting organised by residents concerned about plans for a Tesco Express supermarket to open at 341 Great Western Road. 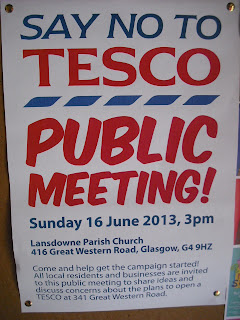 Residents are fearful that this will lead to the loss of the distinct local independent shops on Great Western Road, Park Road and Woodlands Road. The dominance of supermarkets in the high street and the negative impact of one of the largest supermarkets opening in the area was discussed.

Independent retailers in the area are facing economic challenges and the opening of a supermarket would add to their current economic woes.

As a result, it was agreed to organise a campaign to highlight the benefits of shopping locally and to give support to local independent businesses.

Posted by ScottishGreenParty at 16:23 No comments:

Walled garden by the Bothy Project

Yesterday, I dropped in to the walled garden at Sawmillfield Street, off Garscube Road. This is a derelict site which has been transformed in to a temporary exhibition space by the Bothy Project.

There is a showcase of new sculptures, artworks, and murals alongside a wildflower meadow. Three views of the walled garden are provided for reference. 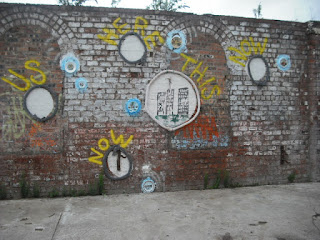 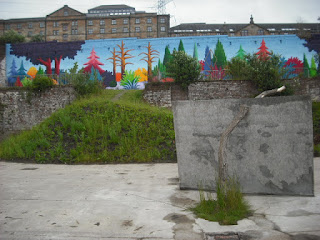 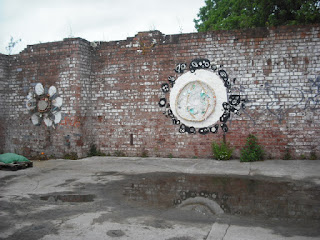 The colourful tree mural caught my eye as I walked over to the walled garden. It provides a striking skyline next to Speirs Wharf. There are various events and activities planned over the Summer. Details are available by visiting on Fridays or contact the project via facebook.

The Bothy Project: Walled Garden - http://thebothyproject.blogspot.co.uk/p/walled-garden.html
Posted by ScottishGreenParty at 16:07 No comments:

Currently beekeepers are prohibited from keeping bees (or any other livestock) on allotments. In response to requests from plotholders, the provision of hives on allotments is being considered.


Partnership working is taking place between Glasgow & District Beekeeping Association, Glasgow City Council and Glasgow Allotments Forum to discuss what support is required for beekeeping. Consultation is ongoing with allotment associations to identify the level of interest in bee-keeping and gather information from pilot projects on specific sites.Councillors supported a motion from Green Councillors to agree a policy for beekeeping on allotments by the end of 2013.

The honey bee is under threat and its best chance of survival is surprisingly in cities. Glasgow offers a very rich foraging area for bees including established allotments. Beekeepers on allotments can take a key role in the city's efforts to reverse the decline of bees.

Awareness of the importance of bees has been increased by the film production "More Than Honey" which was shown as part of the Green Film Festival. At this film secreening, I met with various stakeholders interested in beekeeping across Glasgow. It would be helpful for  sustaining activity if beekeeping expertise is supported by a coordinated approach to supporting bees. There is a need to from a strategy to identify sites for hives and support creation of suitable habitats for bees. This comes from learning from beekeeping experience in other cities such as London.

In the next year, I hope to support beekeeping by working with council officials interested in beekeeping, Glasgow Beekeepers Association, specialist staff from Glasgow Life, and people involved in beekeeping projects such as Johnny's Garden, and Urban Roots.

Posted by ScottishGreenParty at 14:59 No comments:

Last week, I gave my support to the Pilgrimage for Peace and Economic Justice which takes place between 19th May to 19th July. A group of campaigners are walking between Iona and London as part of efforts to get rid of Trident nuclear weapons from the UK. 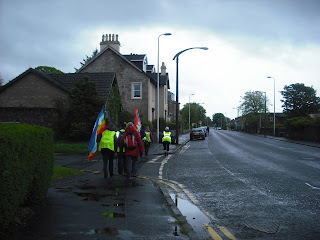 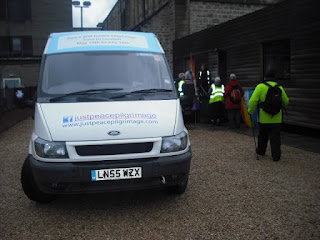 Arrival in Dumbarton, with minibus provided as back up.


In solidarity, I joined the walk on the 10 miles from Faslane Peace Camp to Dumbarton, on Monday 27th May 2013.


"A primary aim of the 2013 Pilgrimage is to focus national public attention on the Government’s proposal to spend up to £100 billion renewing the Trident nuclear missile system, while continuing to slash NHS, education and social welfare budgets, including vital financial support for some of our most vulnerable and disadvantaged people and communities across the UK."

It was a wet day, but I really appreciated the chance to get involved.


Posted by ScottishGreenParty at 02:04 No comments:

Enough Food for Everyone IF is a UK-wide coalition of 180 organisations which come together to influence decision makers of the need for action on the issue of global hunger. I met some of the campaigners involved at the Oxfam stall, as part of the Gibson Street Gala yesterday. 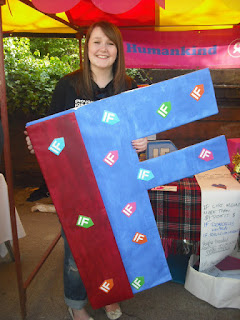 People at the Gala were encouraged to support the call for action by the Scottish Government to help make 2013 the beginning of the end of world hunger.

Enough for Everyone - www.enoughfoodif.org./scotland
Posted by ScottishGreenParty at 01:50 No comments:

A little bit of wilderness

The North Kelvin Meadow and Children's Wood gala was buzzing! Hundreds of families went along today to experience this beautiful greenspace and soak up the community feeling of this unique event. There was something to suit everyone including the traditional homebaking and face painting. 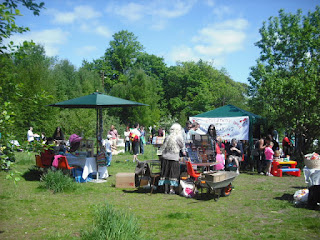 An eclectic mix of craft stalls selling jewellery, crochet, and clothing showcased a range of talented artists and entrepreneurs. 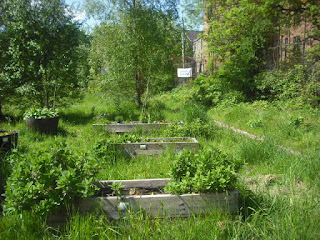 North Kelvin Meadow is a lush growing space with a series of established raised beds and a conservation project for the bumblebee. There is a wooded area where orchids are flourishing. 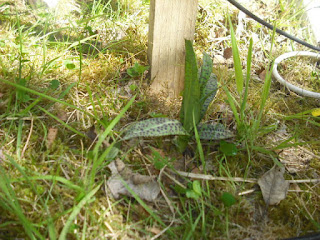 An example of an orchid.

I visited the Children's Wood where I found a a tippee and stage area for storytelling. There are a series of book events going to held in the woodland during the West End Festival. 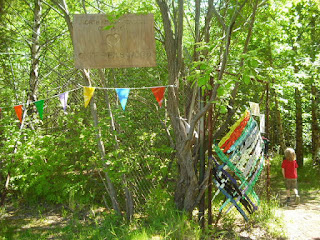 Entrance to the Children's Wood.

During the gala, a Dog Show took place and I meet up with Tilly, a friendly dog, who is supporting the campaign to keep this greenspace available for dog walking. 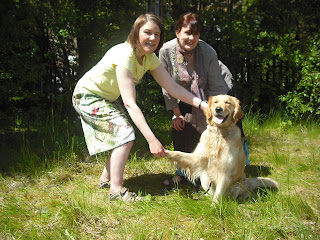 Teresa, Tilly's owner and myself with Tilly giving my support to
the "Tilly Paws Off" Campaign.

The gala was an amazing community gathering which brought a lot of families together, along with their dogs, to enjoy their local greenspace. It shows the strength of support for North Kelvin Meadow and the Children's Wood to be preserved as an open space for community benefit and public health.