Stop Rape - No Means No

This evening, I took part in the 7th Reclaim The Night March from Botanic Gardens to the STUC on Woodlands Road. It is organised by Rape Crisis.

This march gives women a voice and a chance to reclaim the streets at night on a safe and empowering event. By being involved, we put the issue of women's safety on the agenda and demand the right to live without the fear or reality of rape and male violence. 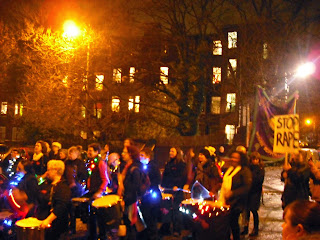 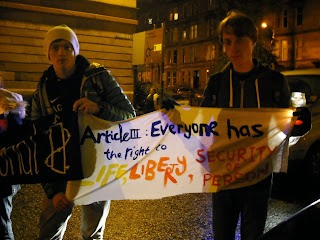 A theme highlighted by the event was to speak out against rape and sexual violence. This year, Rape Crisis have noted a significant increase in all forms of contact in 2012-13. For Support & Information this has been an increase from 2712 support & information contacts (helpline & email) last year to 3957 this year – an increase of over 42%. It is reported that Rape Crisis hotlines have seen a significant increase in calls to their helplines in the wake of the allegations of abuse by Jimmy Saville.

Posted by ScottishGreenParty at 14:12 No comments:

A constitutional ban on nuclear weapons

On Saturday 16th November, I attended the annual general meeting of Scottish CND and there was an informative presentation from John MacDonald, a Director of the Scottish Global Forum on the Prospective Constitutional Ban of Nuclear Weapons in an Independent Scotland.

Reference was made to other states who have achieved a constitutional ban on nuclear weapons including New Zealand, Japan, Ukraine and Mongolia. In the case of Mongolia, at the end of the Cold War, although in close proximity to China and Russia, it adopted vigorous diplomacy to become a nuclear free state. It enshrined being nuclear free in a new constitution and this was recognised by the UN.

In the aftermath of a Yes vote, it would be inconceivable for the UK Government to push for retaining nuclear weapons when the Scottish Government has a democratic mandate to remove them. Alternatively, if there is a No vote, in the midst of public sector spending cuts, it would economic insanity by the UK Government to invest in Trident replacement.

In the year ahead, it is crucial to maintain the campaign against nuclear weapons in the forefront of people's minds. We need to raise questions and put it at the top of the political agenda. 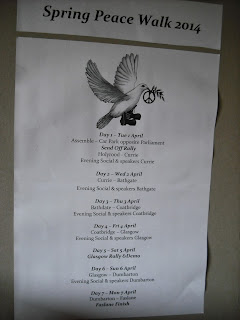 In April 2014, there will be an opportunity to engage communities across Scotland in a debate about the nuclear weapons during a Peace Walk.

"Securing the Nation" report by the Scottish Global Forum -http://www.scottishglobalforum.net/about.html


Posted by ScottishGreenParty at 12:58 No comments:

On 15th November, the Scottish Green Party launched its own distinct campaign for a Yes vote in the 2014 Referendum with the message that a better Scotland is possible. I attended the launch event  in Edinburgh along with Green MSPs and other councillors. 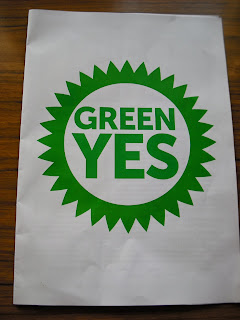 The key points to highlight about Green Yes are;

- As the UK’s politics moves ever harder to the right, it seems increasingly hard to imagine any Westminster government being formed which embodies the values Scotland needs, and deserves.
- Scotland’s political culture is ready for the challenges ahead, given its track record in keeping the NHS whole and in public hands and maintaining the principle of free education.
- The SNP Government’s white paper is the starting point for the transition to new powers.
- But the SNP Government must recognise that as yet they have no mandate for their policies in reserved areas. From NATO membership to the level of Corporation Tax, they should not lock Scotland in to their preferred policies, unless the Scottish people give them a mandate to do so in 2016.
- In the event of a Yes vote the development of a written constitution should be led by a new constitutional convention, to be established before the end of 2014, with political parties involved but not in sole charge.
- In the event of a Yes vote we should explore the possibility of expanding the role of local government.
- We remain clearly of the view that Scotland will only be able to exercise full economic independence if we stand ready to develop our own currency.
Download the Green Yes document here:http://www.scottishgreens.org.uk/uncategorized/green-yes-launches-a-better-scotland-is-possible/
Posted by ScottishGreenParty at 14:04 No comments:

This week, I was informed by staff at City Parking about a bike pod located in Cadogan Square Car Park which is open between 7am to 9pm, from Monday to Saturday. 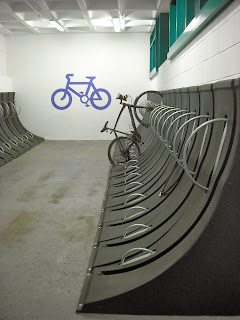 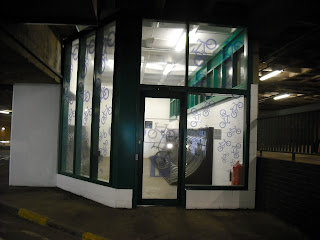 This is a new bike storage facility which can be promoted to the cyclists who commute in and out the city centre. It is conveniently located for workers in the financial district and is near to the cycle route using the Connect 2 Bridge across the M8.

Today, I met up with quite a few residents in and around Woodlands Road. When one of them asked where I was going, I had to reply, "To take photos of rubbish".

There is one thing guaranteed when I make my way around the backcourts of the Hillhead ward, I will encounter overflowing bins, scattered refuse and plenty of cleansing problems. Today was no exception but I am hoping days like this are numbered. Anyway, this is what I found. 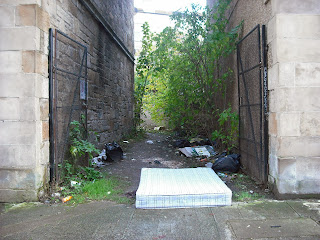 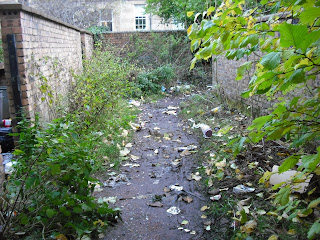 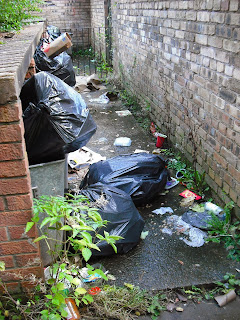 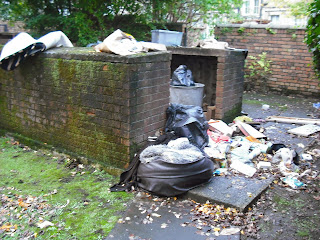 This is not one of the most disadvantaged areas of the city, but investment is still needed to improve the bin areas and backcourts. The recycling rates are very poor. Vermin problems have been highlighted. Public health is an ongoing concern. It is difficult for residents to be able to sit in their backcourt and it could be argued that it is not a safe environment for children to play.

Progress is being made to clean up this backcourt, near Willowbank Crescent, with support from Clean Glasgow and plans to enhance the design of this space are in the pipeline. If any residents of Woodlands are interested in this project, please get in touch as any help would be very much appreciated.

Posted by ScottishGreenParty at 16:05 No comments:

Following requests from residents and evidence of ongoing cleansing problems, I put forward the need for resources from Clean Glasgow to remove the mud and debris from the lanes across Woodlands. Groups of residents, supported by Woodlands Community Development Trust, are encouraged to get involved in clearing up and taking part in maintenance of their lane.
In the last few weeks, the lane between Barrington Drive and Woodlands Drive benefited from access to a digger and a container. Residents were responsible for moving the mud in to the centre of the lane ready for uplifting. 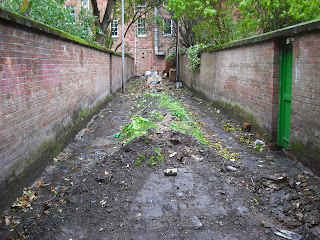 Work in progress to clear mud from the lane between Barrington Drive and Woodlands Drive.


Education and promotion of recycling as well as the bulk uplift service is being developed as part of this project. Maintenance plans for each lane is underway with input from residents in partnership with the Trust and Cleansing staff.

Posted by ScottishGreenParty at 15:39 No comments:


In the last week, I attended events to celebrate the 40 year anniversary of Glasgow Women's Aid. On 7th November, a Rowan tree was planted in memory of the women and children victims and survivors of domestic abuse. 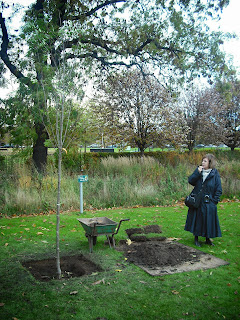 Elspeth King planted the Rowan Tree in Glasgow Green.
.
Glasgow Women's Aid (GWA) was set up by women in 1973 to open a refuge. The introduction of the Housing (Homeless Prevention) Act 1977 made re-housing much easier as it brought in a duty on Local Authorities to house battered women, from that area who were not intentionally homeless and who had children. GWA was able to open its first office in Hope Street in Glasgow in 1979. Today, there is an office in Bell Street and provision of refuges (37 spaces and 7 refuges). It is registered charity managed by a board of directors with paid staff and volunteers.

Recognition has been given to the women's achievements and their struggle against male violence during the 40th anniversary celebrations. The demand for the services of GWA has been steadily growing. There is a continuing need for refuge provision, support and information. Efforts have to be maintained to support women and children experiencing domestic abuse.

Glasgow Women's Aid - http://www.glasgowwomensaid.org.uk/how-can-you-help.html
Posted by ScottishGreenParty at 15:22 No comments:

Increasing risk of poverty for women

During the Challenge Poverty Week, I heard about women’s experiences of trauma and suffering due to the Welfare Reforms and there is a need for the Council to take action to address the ongoing hardship facing women due to the changes to the Welfare State. It is vital that we acknowledge the gender impact of welfare reform and enable women to engage in discussions about the services they need to address the circumstances that they find themselves in. A recent report by Scottish Government on the impact of welfare reform confirms that women have been disproportionately affected by the measures brought in by the Coalition Government since 2010. On Thursday 31st October, I proposed this motion at a Full Council Meeting and it was agreed unanimously:-

Glasgow City Council welcomes the first Challenge Poverty Week from 13th - 17th October which brought together a wide range of groups and individuals to highlight what is being done to tackle poverty and build momentum for increased action.

Council acknowledges that women may be at increased risk of poverty compared to men, and can experience recurring, long term poverty. In Glasgow , there is a disproportionate number of lone mothers in the most deprived neighbourhoods, as well as some black and minority ethnic women who may face a particularly high poverty risk.

Council notes that many of the welfare reforms have a larger impact on women, due to women’s roles as carers. As a consequence, poverty and social exclusion, especially amongst female single parents is expected to increase in Glasgow .

As part of Glasgow’s Action Plan for Change, the Council will do more to engage with women's organisations and individual women directly experiencing poverty, to identify:-

1. the impact of key policies implemented under the banner of Welfare Reform

2. areas in which it can mitigate the impact of the UK ’s welfare reform programme

3. gaps in support services for women affected by the welfare and tax reform policies.

Council agrees to support the development of dialogue with women's organisations to address the continuing challenges that women face in tackling poverty.
Posted by ScottishGreenParty at 14:19 No comments: