There are continuing efforts to challenge the banking systems and create a fairer financial system through protest across the world. Glasgow's protest camp moved from George Square to Kelvin Way in the last two days. 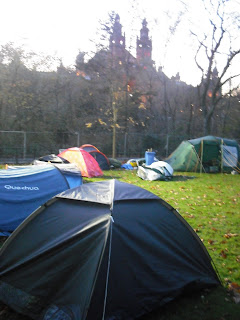 Tents set up at new site on Kelvin Way.

In the last three weeks, I have supported negotiations between protesters and council officials to ensure that an amicable agreement could be reached. Protesters can seek to campaign for change from the secure base in Kelvin Way and the various activities can go ahead as planned in George Square.
Posted by ScottishGreenParty at 06:09