This evening, a joint event between Glasgow Campaign for Nuclear Disarmament and Glasgow City Council was held to commemorate the dropping of the first atom bombs on the Japanese cities of Hiroshima and Nagasaki . 2015 is the 70th Anniversary of these horrific events. 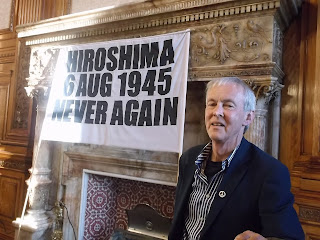 I attended this informative event which included a civic reception and a welcome from the Glasgow Provost Sadie Docherty. In addition, Chris Dolan read a Japanese survivor's account, John Ainslie provided a detailed historical context in which the bombs were dropped, and Alan Mackinnon described the horrific medical impact of nuclear war.  There was Japanese music played by Eddie McGuire and songs from Arthur Johnston. 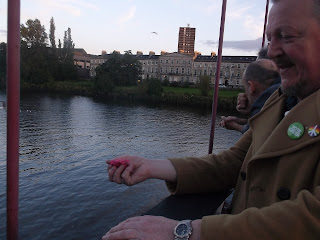 Rose pedals were thrown in to the River Clyde
to remember the victims of Hiroshima and Nagasaki Nuclear Bombs. 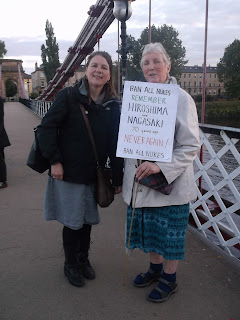 At the River Clyde with Ban All Nukes Banner