Stand up to Racism Gathering

On UN anti-racism day on 19th March, people across the world take a stand. Together we show unity in the face of racism. The racist tide will only be driven back by you and me standing up and confronting it.

Across Scotland, people are outraged at the Islamophobic and anti-Semitic backlash after the Copenhagen and Paris attacks. Immigrant communities are fed up with being wrongly blamed for an economic crisis they did not create. Scotland can be proud of progress that has been made to enhance equality, protect diversity and strengthen access to justice. However, we do not yet live in a country where everyone has equal access to security and opportunities.

The Scottish Green Party stands for zero tolerance against all forms of discrimination. We are focused on tackling barriers to services, employment and participation in society, and defending access to justice for all as a fundamental human right. Racial discrimination remains a crucial issue in Scotland, for UK-born individuals, as well as for refugees and first generation migrants. People from Scotland’s minority ethnic communities are significantly more likely to live in poverty, and employment and political representation rates are unacceptably low compared with white ethnic groups. Greens support full implementation of the Racial Equality Framework for Scotland 2016-2030 in order to tackle pervasive racism across our society.

Scottish Greens support groups across Scotland who assist refugees and asylum seekers fleeing horrendous situations in the Middle East and Africa. We are a welcoming nation, and there is a strong voice across Scottish society determined to offer asylum and create safe routes for travel.Scottish Greens are members of the European Green Party and this provides opportunities to support efforts to address the refugee crisis at an EU level. 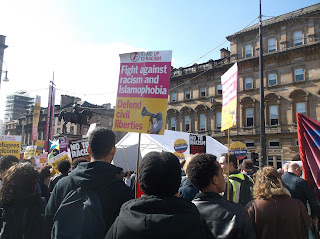 Stand Up to Racism Rally in George Square.
On Saturday, at Glasgow's Stand up to Racism Rally and March, we showed solidarity with efforts to welcome and support integration of refugees across Europe, celebrating human unity and the diversity of the human race. it was a chance to reaffirm our commitment to eliminate all forms of discrimination and help create communities and societies where all citizens can live in dignity, equality and peace.
Posted by ScottishGreenParty at 14:37