Yesterday, thousands of women around the world rallied in support of the UN treaty to ban nuclear weapons. The significance of these negotiations at the UN cannot be overstated. Nuclear weapons are a scourge on all humanity. 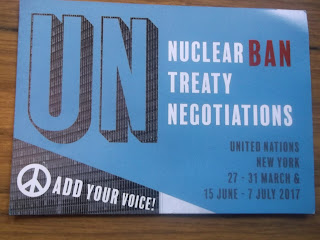 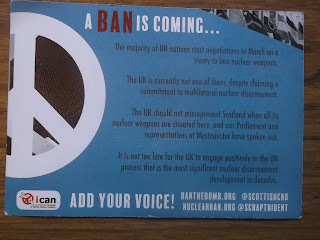 There are one hundred and thirty nations taking part in the negotiations on a UN treaty to prohibit the most horrific weapons ever created. People gathered at the Buchanan Street Steps in Glasgow to join with citizens of Hiroshima to say it's time to outlaw nuclear weapons. 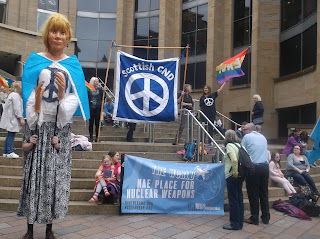 Every nation will be better off in a world without nuclear weapons. We gave a big shout out to our Scottish CND friends representing us at the UN in New York as the UK Government's Chair remains empty. At the gathering, I called for the need to ensure that women's leadership and participation in humanitarian action and peace-making is supported. There is a lack of funding for local grassroots organisations that support women in peace-making, particularly women with disabilities. When women are community leaders, there is more peace and security in society. We stand together in support of the nuclear ban negotiations and call for peace, justice and disarmament. 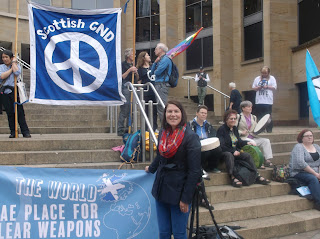 We will continue to work together to bring great strides for women in Scotland and beyond to participate in the peace movement. We push for money to be moved from nuclear weapons to implementation of the nuclear weapons ban. Let's invest in women and gender equality. Stop the Arms Race. Now's the time for a nuclear ban.