Women and the Austerity Cuts

On Saturday 10th March, I join campaigners against the cuts to services which are creating economic hardship for women and their families. The difficulties women are facing when they want to access further education were highlighted. It was recognised that women who dream about improving themselves and taking up better job opportunities are facing barriers, especially from lack of finances and childcare. 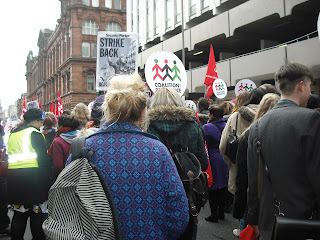 March against the cuts on George Street.


The march within Glasgow's city centre provided an opportunity to protest at the changes proposed to the Welfare State and growing inequalities arising from the financial crisis.

Scotland has a poor record in terms of rape convictions and it is acknowledged that services provided by rape crisis and women aid projects require additional funding to change this situation. Women shared concern about not being able to access support if they experience domestic violence or rape due to cuts in services.