Unveiling of the Mary Barbour Statue

Yesterday, I took a trip on the Glasgow Subway to Govan Cross to see the unveiling of the Mary Barbour Statue by the Lord Provost of Glasgow, Eva Bolander. The statue celebrates the life of one of the first women councillors for Glasgow, who was elected in 1920. Mary Barbour campaigned for more affordable rents and better housing conditions. 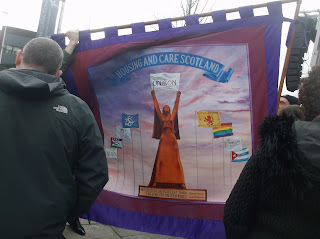 A Unison banner featuring La Pasionaria next to the River Clyde. 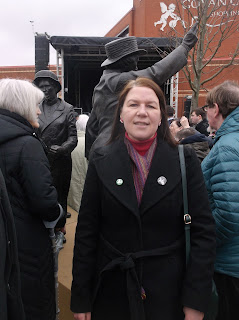 After the unveiling, standing next to the statue.

This event took place on International Women's Day which had the theme of "Press for Progress". We have to continue to seek improvement to the city's housing conditions and make rents more affordable.

Special thanks go to everyone who helped raise the funds which made it possible to commission the statue designed by Andrew Brown. The statue has been passed to Glasgow City Council, to be maintained at Govan Subway Station's entrance, on land owned by SPT.
Posted by ScottishGreenParty at 14:44