Taking the bus to London

This week, I made a bus trip to London and back again. It was a journey to visit members of my family but my time there coincided with the Occupation of the Financial District by peaceful protesters. On 18th October, I went along to the site of the occupation, next to St. Paul's Cathedral to see for myself what was going on. 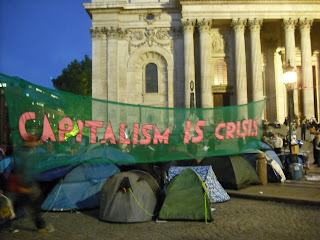 There were over 200 people gathered together in the early evening to share news and organise their activities. ﻿I joined in a debate about what the Occupation hoped to achieve and was inspired by people's belief in bringing about change in the financial system to create a fairer world. 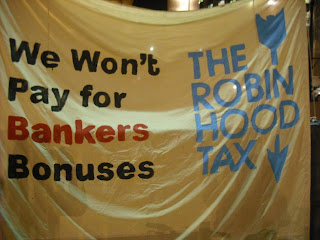 On my return to Glasgow, I have meet up with people occupying George Square who share the same concerns as other people involved in the occupation movement in London and across the world.

We are living in a time of increasing financial hardship. It would appear that these protests are seeking change by collective action involving people who are not going to accept widening inequalities within our society, the ongoing banking crisis and the government cuts to jobs and services.