Transition to the new economy

It has been an extraordinary week for the global financial system and protest movement against the cuts. I took part in the mass demonstration organised by the STUC on Saturday 1st October and joined with trade unionists, peace activists, students and young people concerned about people's future in the midst of the worst ever financial crisis the world has faced. Since then, we have seen the governor of the Bank of England printing another £75bn to ease the financial crisis but forecasters cannot guarantee this will bring an end to the ongoing economic misery facing the poorest and most vulnerable groups. 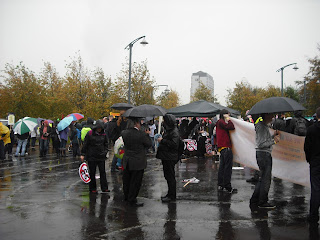 Memories of a rainy demonstration on 1st October 2011.

It is clear that humans are facing tough times. There is a way forward through support for progressive economic policies and development of local resilient communities, focused on energy efficiency and renewable energy production.

We can act locally and harness the talents, vision and goodwill of local community organisations and their membership. By getting involved in a local transition movement, our efforts can invest in ongoing local collective action that looks to adapt to the end of cheap oil, rebuild local agriculture, consume less "stuff" and localise energy production.

Inspiration can be found from the various projects being supported by the Transition Towns Movement and New Economics Foundation.