Art in public spaces is enjoyed by many residents in the West End. It can be the transport-themed mural covering the wall at Kelvinbridge, the Stewart Memorial Fountain in Kelvingrove Park that invites us to jump and splash and laugh, or the Lobey Dossier statue on Woodlands Road which draws our eyes and thoughts away from day-to-day cares.

Public art can convey a community's joy or sorrow, its history or beliefs or visions for the future.

Residents have highlighted their support for the preservation of a concrete crocodile sculpture in Braid Square, in Woodside. It has to be saved as part of the refurbishment of play spaces in the area due to the local outcry.


The crocodile is valued as part of the community's identity, having survived the threat of vandals, and has to be retained.

Another local landmark which requires restoration is St. George, his Horse and the Dragon at the junction of St. George's Road and Maryhill Road. This was designed by Charles Benham Grassby for the St Georges's Co-operative Society tenement in Gladstone Road, off St George's Road (1897, dem. 1985). The St George group was rescued from its building in 1985, when it was about to be demolished, and was re-erected by the Co-op at St George's Cross as a public monument in 1988. 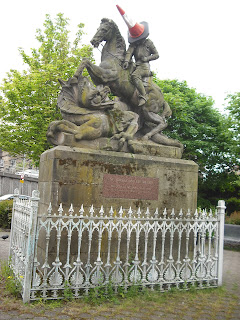 It is really worth discovering and exploring the sculptural and architectural treasures of Glasgow. There is a wonderful collection from the 'golden age' of the Victorian and Edwardian eras, as well as a excellent examples from more recent times.